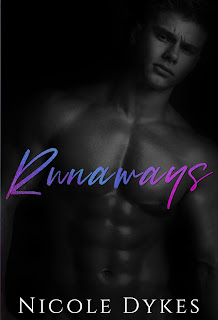 Note: An advanced reader copy (ARC) was provided by the author via Wildfire Marketing Solutions.
Two books in, and I continue to be impressed with Nicole Dykes and her very obvious gift for writing romances that resonate with me. Runaways is a standalone, and it has a different feel from my introduction to Dykes's writing, Immoral. This new release is more young adult (YA) with a heavy dose of angst, which this angst addict is most certainly not complaining about. This wasn't a light read, so if you prefer your YA romances all light and fluffy, might I suggest you save this one for when you're in the mood for major angst.
Runaways is the story of Raelynn Sanders and Lawson Davis, two teens who went to the same school and may have been the unlikeliest of people to become friends, but friends they did become. It turns out these two may have more in common than you would think, and the kinship they form becomes the support system they need to get through each day. When life at home becomes too unbearable, Rae and Lawson do the only thing they felt they could: run. All they had was each other, but maybe that would be more than enough.
It was near impossible for me not to become emotionally attached to Rae and Law. These two may have been young, but they were survivors and had a maturity to them beyond their years. They were forced to confront things that I wouldn't wish on my worst enemy. You don't have to share the same experiences in order to empathize with they went through. I'm nearly thirty years older than these main characters, yet I don't know if I would have had as much courage and fortitude. Such a good book. 4.5 stars for Runaways.
Date Read: 22 September 2021
Learn more about Nicole Dykes.
Purchase Runaways on Amazon.