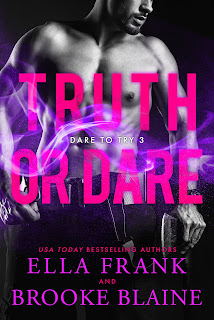 Note: An advanced reader copy (ARC) was provided by the authors.
I am an angst addict when it comes to the books that I read. Always have been, always will be. That doesn't mean, however, that I don't read nor appreciate books that don't have a smidgen of angst to them. To be fair, though, the first two books in the Dare to Try trilogy, Dare You and Dare Me, more than sufficiently met my angst quota, and after everything Kieran Bailey and Sebastian Vogel hurdled, they deserved an angst-free conclusion to their love story. Nevertheless, that doesn't mean that these two men don't encounter their fair share of complications in Truth and Dare. After all, Chicago, Illinois is Kieran's home, where he has a job he loves, and has his older brothers, Sean and Bailey; South Haven, Georgia is Bash's home, it's where AnaVoge headquarters are located, and it has his best friends--the men he considers family. They're guaranteed a happy ending--but where will it end being, and will it cost them more than either may be able to handle?
Ah, I'm feeling all giddy and my heart is happily sated. Kieran and Bash have been through quite a bit, and while it went without saying that these two were going to get their happily-ever-after, I was actually worried about the choices they would need to make in order to get there. They both had lives they were content with and surrounded by people who were exactly that--their people. I had my own guess as to where they would decide to have their home base, and while I did turn out to be right, it didn't take away from the excitement of finding out how the move would be made and how they would break the news to the people at the place that was going to be the one that would be visited often but no longer be considered home. I mean, home is where the heart is, right, and with these two, whichever place they would end up choosing would be exactly that--home, because that's where the other person was. Le sigh. Ella Frank and Brooke Blaine have done it again, and I'm glad they dared to try (see what I did there?) joining two of their book worlds together, and we reap the rewards. Five stars for Truth or Dare.
-------------------------
Read my reviews for the Dare to Try series: