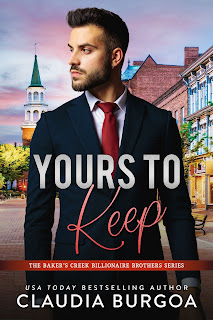 Note: An advanced reader copy (ARC) was provided by the author.
Claudia Burgoa takes readers back to the small town of Baker's Creek in Oregon with the sixth and final novel in her Baker's Creek Billionaire Brothers series--but maybe not the final one set in Baker's Creek. More on that later. Yours to Keep is the story of the remaining single Aldridge brother, Vance, and it's the only one that's an M/M romance. At thirty-three, Vance finds himself discovering and having to deal with a certain truths. Not only has been stuck in Baker's Creek with five of his six brothers, what with Carter having passed away some time ago, but he's just learned that his brothers-in-arms weren't the men he thought they were. Everyone around him keeps pushing him to deal with his feelings and emotions, but that's easier said than done. Then thirty-five-year-old neurosurgeon Darren Russell comes along and knocks Vance's orderly world off its axis.
One of my favorite things about Claudia Burgoa is how she seamlessly adds an M/M story to a series that's mostly M/F romance. My introduction to her writing came by way of an M/M romance that shared the spotlight with the story of a daughter and her relationship with her fathers. So, I wasn't all that surprised that this book wasn't entirely about Vance and Darren as a couple. A lot of the story is also about Vance and his brothers and how they've been brought together by an edict in their late father's will. Then there's a bit about Darren and his well-meaning but overbearing family. This was a slow burn romance with a fair amount of sexual tension. A word of advice: Read the series in order. There are certain aspects of the series that play out throughout all the BCBB books. I did like the surprise twist, though, so all things considered, Yours to Keep receives four stars.
Release Date: 07 September 2021
Date Read: 03 September 2021
Learn more about Claudia Burgoa.
Pre-order Yours to Keep on Amazon | Apple Books | B&N | Kobo.