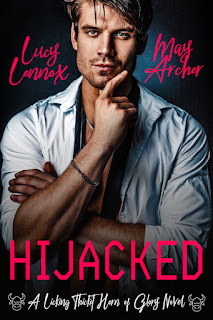 Note: An advanced reader copy (ARC) was provided by the authors.
The awesome twosome of Lucy Lennox and May Archer are back with a spin-off series, Licking Thicket: Horn of Glory (formerly known as Thicket Security). While Hijacked is set partly in Licking Thicket, Tennessee, it also features Great Nuthatch, Tennessee AND the jungles of Venezuela as backdrops. If you're familiar with the original Licking Thicket series, you should remember Dr. Carter Rogers, cardiologist and ex-boyfriend of Dr. Tucker Johnson, née Wright (Fools, Licking Thicket #3). This new series starter is Carter's story, one he shares with William Riggs, former Marine and current security specialist with Champion Security. Both are in their thirties and are forced to endure each other's company thanks to Riggs being assigned as Carter's sole protection detail for overseas medical work via Doctors Across Continents, a program akin to Doctors Without Borders.
There was a lot to like about this new book from Lucy Lennox and May Archer, and it served as a great introduction to his Licking Thicket: Horn of Glory series and the new set of recurring characters from Champion Security as well as some of the Horn of Glory peeps, HoG being an uber popular game that countless people appear to be addicted to in the series and Champion Security being the private company that provides security for HoG. Carter and Riggs are basically forced into each other's company because Carter's grandfather insists he have a bodyguard with him as he participates in Doctors Across Continents in Venezuela. Riggs may not be thrilled at the idea of what he considers babysitting detail--and a rich, privileged doctor at that--but he knows that he needs to stay focused on the task at hand in order to prove himself to his boss. But how long can he resist the hot doctor, and when they're abducted, will he be able to save the man he's begun falling for, a game designer in heaps of trouble, AND himself before it's too late?
Hijacked was a fun-filled and lighthearted read with a nice dollop of romantic suspense to it. The whole enemies-to-lovers trope was employed quite well, and I enjoyed seeing the main characters trying to deal with the fact that they've been drawn to each other from the get-go but have purposely been acting in a way that both aggravates AND attracts one another. I've been hoping Carter would get his shot at his own happily-ever-after, and he certainly gets a hard-fought yet deserving one here with Riggs. And speaking of Riggs, it's clear that he and the rest of Champion Security are giving the townsfolk of Licking Thicket a run for their money because these security specialists have sparked my curiosity and my interest shows no signs of waning. There are moments of outrageousness and absurdity, but those aren't necessarily negative points as far as I'm concerned, especially with writing as fab as Lennox and Archer's. 4.5 stars go to Hijacked.
Release Date: 02 September 2021
Date Read: 31 August 2021
Learn more about Lucy Lennox and May Archer.
Purchase Hijacked on Amazon.