Review: Falling in Reverse by Julia Wolf (The Seasons Change #1) 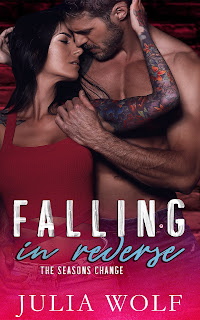 Note: An advanced reader copy (ARC) was provided by the author via Wildfire Marketing Solutions.
Falling in Reverse is the first novel in the newest series from Julia Wolf, The Seasons Change. There's actually a novel off which this series is spun off of called Built to Fall, which I've yet to read. It also made me realize that it's been almost eleven months since I last read something penned by this author. It was a total smack-my-head moment. Now, I've got Built to Fall on my Kindle Fire, waiting to be read (hooray for Kindle Unlimited!). But I digress! Let me say this: the Seasons Change series starter has set the bar super high.
At twenty-five, Iris Adler is in control of her life. She's the lead singer of The Seasons Change, and the band is soaring its way towards stardom. The last thing she wants is a bodyguard, especially one as bossy as the thirty-five-year-old marble wall of stoicism with an Irish accent named Ronan Walsh. But a home invasion has her record label worried after her security, so she's going to have to deal with having Ronan up close and personal. The same Ronan who's tough as nails, but has a soft spot when it comes to dogs. And maybe one for the woman he's tasked to keep safe...the only one he's now falling for.
Ooh, this book was such an awesome read! It was a rock star romance some suspense added into the mix, and I was all for it. Then there were these main characters who shared some of the most palpable chemistry I've come across in (my) recent (reading) history. Seriously, I needed to fan myself every single time Iris and Ronan were in proximity of each other. This had sex and romance alongside the suspense, angst, and wit, and one heck of a really absorbing story. It was intense and addictive but also moving and thoughtful. I'm definitely looking forward to read the rest of the Seasons Change series, as well as check out the freebie story. Falling in Reverse receives five stars.
Release Date: 24 September 2021
Date Read: 24 September 2021
Learn more about Julia Wolf.
Purchase Falling in Reverse on Amazon.