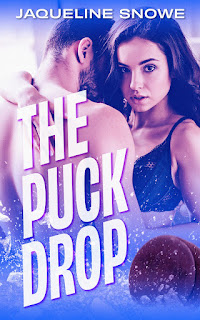 Note: An advanced reader copy (ARC) was provided by the author via Grey's Promotions.
I've been eagerly awaiting the release of The Puck Drop ever since Jaqueline Snowe announced that she was writing the story of Michael Reiner, brother of Ryann Reiner from Holdout (Moo U #3). It's been a seven-month wait, but after having read the book, I must say that it's been worth it. The book also happens to be the first in Snowe's new Central State series, which is set in Illinois. After getting glimpses of the supporting characters in this series starter, I find myself eager to peruse their stories going forward.
The Puck Drop has twenty-four-year-old Michael Reiner making the move from the Northeast to the Midwest. This allows him to separate himself to a degree from the loss and disappoint that still weighs on him. The opportunity to intern with Central State's head coach while he works on his post-graduate degree is a big deal for Michael. But when twenty-one-year-old Naomi Fletcher-Simpson becomes a co-intern, she also becomes a distraction, one he can't resist but can't afford to have. Not when she's one of the head coach's twin daughters. And not when Naomi hates the very sport Michael loves.
Ooh, but how I loved these two main characters! The chemistry was there, and I enjoyed seeing them forge a friendship that had that delicious underlying thrum of awareness and attraction sizzling between them. They also had rich back stories, and I easily empathized with Michael and understood where Naomi was coming from. I appreciated the conflict they had to face, and that it wasn't the usual sort of resolution, which I'm always up for, especially when done well. The family story line for both MCs was also rather moving. There were a number of notable supporting characters whose own stories I'm excited to dive into as the Central State series progresses. 4.5 stars for The Puck Drop.
Release Date: 14 September 2021
Date Read: 13 September 2021
Learn more about Jaqueline Snowe.
Pre-order The Puck Drop on Amazon.