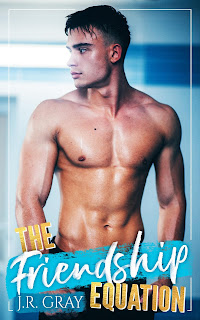 Note: An advanced reader copy (ARC) was provided by the author via Candi Kane PR.
The Friendship Equation is a coming of age M/M romance from J.R. Gray featuring two best friends who would do anything for each other--even explore their sexuality. Vance Finch and Harden Hart have been the closest of friends since they were five. There are no secrets between them...or at least that's what Harden thought until Vance inadvertently admitted to still being a virgin and that maybe he isn't as straight as everyone thought he was. When Harden offers to help Vance with his "problem", things begin to shift. Vance has had feelings for his best friend for quite some time, and he isn't sure he'll be able to handle getting his heart broken since there's never been a question that Harden is straight and could never possibly want something more than friendship with him. Right?
It took me a bit to figure out what I wanted to say in my review because while this book did have its positive points, I did struggle with certain aspects of it. The friends-to-lovers trope is one of my go-tos, and since most of the M/M romances I read have older main characters, I liked the fact that Vance and Harden were both eighteen and at the cusp of adulthood. The story is told entirely from Vance's perspective, and the lack of Harden's point of view is possibly where the book falters most. I was left wondering what his motivations were for the things he did, especially when it came to his easy offer of helping Vance with his "problem". Because Harden brought it up so often, I couldn't help but wonder if he may have had a thing for Vance as well prior to his bisexual awakening.
Harden and Vance's friendship was a given and it was clear they had sexual chemistry, but I do wish there were more moments where it wasn't about them having sex or discussing swimming so that when they both confess to being in love with each other, the foundation had already been laid. (I could insert a pun right about here, but I won't because I'll digress.) And again, this is why I wish that the author had given readers some idea about what was going on inside Harden's head and heart. The dirty talk was good and all, but since this is supposed to be more romance than erotica, more heart to level out all that heat as well as a few chapters from Harden's POV would've been appreciated.
The story angle regarding Harden's politician father was okay, but the guy's personality shifts gave me whiplash. On the other hand, Vance's father was consistent and proved to be the type of supportive and understanding parent that anyone going through all those changes in their young life deserved. Other notable side characters were Harden's younger brother, Liam, and Harden's main swimming rival, Jeff Woods--mainly because these two saw far more than the main characters may have when it came to the dynamics of their friendship. But it's that devotion that Vance and Harden shared that remains the most noteworthy aspect of their story, so while the book falters at times, The Friendship Equation held my attention and the main characters earned my affection. It gets 3.5 stars.
Date Read: 28 August 2021
Learn more about J.R. Gray.
Purchase The Friendship Equation on Amazon.