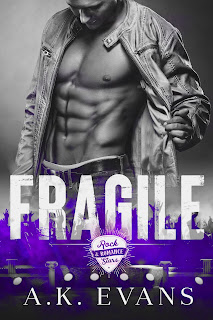 Note: An advanced reader copy (ARC) was provided by the author via Give Me Books Promotions.
A.K. Evans is an author who I've come across time and again on Goodreads, but while I've always been curious about her work, I've hesitated because whenever time permitted her new release would be the latest in an already ongoing series. If you're familiar with my reviews, then you may remember that I've made mention of my preference for reading books in a series in order. So, I decided to bide my time, and fortunately, the perfect opportunity came along because Evans has a new series, which meant a new series starter! The series is Rock Stars & Romance, and book one is Fragile, an opposites attract romance between the front man for My Violent Heart, an immensely popular and famous industrial rock band and the one woman who doesn't seem to least be interested in him.
Thirty-two-year-old Cash Morris is a man who revels in the success he and the rest of My Violent Heart have. After all, they've worked hard to achieve the stature they enjoy in the music industry. Cash is used to getting what he wants, so imagine his surprise when the gorgeous manager at the hotel he and his band mates and crew stop at in New Hampshire doesn't swoon at his feet. It's not that thirty-year-old Demi Stokes has no idea who he is or that she hasn't noticed how hot he may be. She simply refuses to be yet another notch on Cash's thoroughly notched up bedpost. He's a rock star, and she's just a regular woman. She knows all too well that becoming involved with him would be a recipe for heartache. But what if she's wrong and he proves worthy of her fragile heart?
Color me smitten because I seriously adored this book! It looks like I've truly been missing out, but after reading this series starter, I plan on checking out A.K. Evans's back list and working my way through it. Naturally, I'll also be eagerly awaiting the rest of the Rock Stars & Romance series, especially since I'm quite intrigued by two potential couples already. But first, let's focus on Demi and Cash and how these two had my all giddy with anticipation as Demi learned to trust Cash and his feelings for her. Part of what made this such a great read was exactly that--the anticipation as to what would happen next with this couple. This story had the sweet and the steamy as well as snippets of humor and a dash of angst. Fragile not only met my expectations but exceeded them. It gets 4.5 stars.
Release Date: 07 September 2021
Date Read: 04 September 2021
Learn more about A.K. Evans.
Pre-order Fragile on Amazon | Apple Books.