Review: The Lie by Karla Sorensen 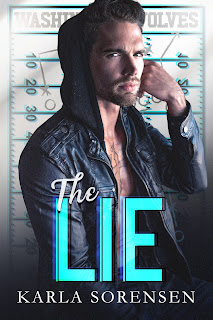 Note: An advanced reader copy (ARC) was provided by the author via Wildfire Marketing Solutions.
Karla Sorensen is back with a new novel set in her much-loved Washington Wolves book universe. I'm honestly not entirely sure if The Lie is part of the original Washington Wolves series, or if it's the first in a new spin-off series featuring the second generation, i.e. the offspring of the couples from the original series and maybe those of the Ward Sisters series, too. Either way, this can pretty much be read as a standalone, though I wouldn't be surprised if new readers get all curious about the OG couple, Luke and Allie Pierson, whose journey to their happily-ever-after plays out in The Bombshell Effect, the first book in the Washington Wolves series, or maybe even the other book world couples.
If you're a Karla Sorensen fan or reader, then you'll easily recognize Faith Pierson, Luke Pierson's older daughter and Allie Pierson (nee Sutton)'s step-daughter. Faith is all grown up and is now twenty-six and was recently promoted as the director of her family's foundation, Team Sutton. Experience has taught her that football players were a no-go, so why is she drawn to the bad boy who's just been traded to her family's team, the Washington Wolves? Dominic Walker's reputation precedes him, so getting in trouble on the same day he's welcomed by the team is no shocker. Tasked to volunteer at Team Sutton with Faith keeping an eye on him feels like a chore...at first. Can Faith trust Dominic with her heart; better yet, how willing is Dominic to entrust his heart to Faith?
Talk about having my expectations met! When Karla Sorensen announced that Faith would get her own book, I was excited to see where she would take this second generation of Washington Wolves characters, and if Faith's book would spark the beginning of a new spin-off. I loved how Faith and Dominic--who I think was a year or two younger than Faith's twenty-six based on my computation but don't hold me to that--helped push the other's long-set boundaries. These two shared one heck of an extraordinary connection, one that was begging to be explored and delved into. The supporting cast of characters was certainly memorable--not necessarily scene-stealers, but the new ones were enough to have me hoping they would get their own books in the future. The Lie had romance, family, football, wit, and angst, and it easily earns five stars.
Release Date: 15 September 2021
Date Read: 13 September 2021
Learn more about Karla Sorensen.
Purchase The Lie on Amazon.