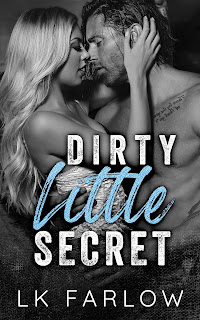 Note: An advanced reader copy (ARC) was provided by the author via Give Me Books Promotions.
I've been looking forward to reading Stella Cartwright story ever since the release of Sweet Little Nothing last year. Dirty Little Secret is the title of her book, and if you've read the previous book, then you may remember who Stella was hung up on--her brother's best friend, Samson Carter. If the whole bro code wasn't enough of a complication, the six-year age difference wasn't exactly something that could be easily overlooked. No need to worry, because there are no nefarious older guy and underage girl sexual shenanigans.
Stella was eight and Samson was fourteen when his family moved into the neighborhood. Over the years, she nursed her crush, but it wasn't until Stella was thirteen when Samson began to look at her differently. At nineteen, he knew there was no way he could act on his feelings. Then Stella turns sixteen, and they make promises to each other. She was his; he was hers. They would wait till she was eighteen. And wait she did, only for him to break her heart by walking away from her. Months later, Samson's back, but Stella? She's changed. Stella's learned her lesson, and she has zero plans of being his dirty little secret.
While I may have had some reservations going into Dirty Little Secret after my reading experience with Sweet Little Nothing, I'm happy to say that LK Farlow has repaid my trust in her writing with an entertaining second-chance romance with some major falling-for-my-best-friend's-sibling feels. Stella was a notable supporting character in the previous book, but she's absolutely stepped up to the plate as far as being a main character is concerned. I love her independence and sass. She knows her worth and makes no apologies for demanding what she deserves. Samson clearly loved her, and while there were times I wanted to smack him, he did prove himself worthy. I'm giving this four stars.
Release Date: 23 September 2021
Date Read: 20 September 2021
Learn more about LK Farlow.
Purchase Dirty Little Secret on Amazon.