Review: Faking It with #41 by Piper Rayne (Hockey Hotties #3) 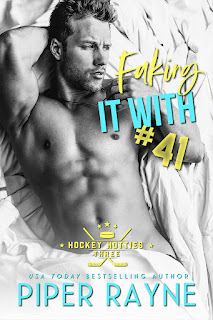 Note: An advanced reader copy (ARC) was provided by the authors via Wildfire Marketing Solutions.
I had a feeling this was going to be my favorite in the series. There was something about Ford Jacobs in the first two full-length Hockey Hotties books, My Lucky #13 and The Trouble with #9, that made me believe we'd only begun to scrape the surface with him and his story. In Faking It with #41--which is the third in the series and the one I thought would close said series out, but more on that later--twenty-eight-year-old Ford has gone from bad boy, party boy, and playboy to single father and maturing man in progress. He's doing the best he can as the sole parent to his four-month-old daughter, Annabelle, while also being at the top of his game as Florida Fury's right wing. He's made it abundantly clear he wants nothing to do with his family's business, Jacobs Enterprises. So, he's father makes him a deal: pretend to be happily engaged with their PR person, Lena Boyd--who's in her early to mid-twenties, I think--and Ford will be forever free of any obligation to join the company. What happens when being together doesn't feel like pretend anymore?
I absolutely enjoyed the heck out of this book! Now, I admit that fake relationship romances aren't my go-to, particularly because they tend to follow the same basic story line. I'm happy to say that the writing duo of Piper Rayne gave their own creative touch to make Ford and Lena's story one that not only held my attention, but allowed me to feel engaged in every single thing that was happening with them. I seriously adored getting to know these two, and liked seeing how they developed as main characters and as a couple. Ford is still every bit the cocky guy that he's been earlier in the Hockey Hotties series, but now, readers get to see a vulnerability to him, especially when it comes to his daughter, Annabelle. He and Lena were not exactly enamored with each other in the beginning, this is where the whole forced proximity part of their romance was important, making it possible for them to see one another in a whole new light. I originally thought Faking It with #41 was the final book in the Hockey Hotties series, but it looks like there are more to come, and I'm curious to see how these newer Florida Fury players connect with Aiden, Maksim, and Ford! The next book up has me excited already. Five stars go to Ford's book.
---------------------------
Read my reviews for the Hockey Hotties series: