Review: The Trouble with #9 by Piper Rayne (Hockey Hotties #2) 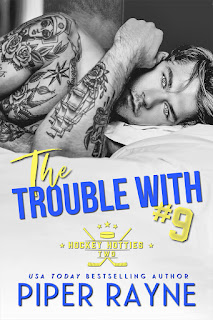 Note: An advanced reader copy (ARC) was provided by the authors via Wildfire Marketing Solutions.
Ah, Piper Rayne's Hockey Hotties do have a knack of getting themselves into all sorts of trouble, and now, we've got #9 to turn our attention towards. The Trouble with #9 is Maksim Petrov's story, and it looks like he's stuck between a rock and a hard place, both in terms of his life on and off the ice. When team management insist that he speak to a pre-approved therapist, he balks at the idea. Sure, he's been getting into more and more trouble on the ice, but spilling his guts to some stranger only to have them psychoanalyze him isn't his thing. But the therapist isn't a stranger--it's the woman he shared an unforgettable kiss with over New Year's. He knows she wants him as much as he wants her, but Paisley Pearce is aware of the hit her fledgling practice will have to face if she crosses that line with a patient. Maksim's solution? Lie to her during their therapy sessions in order to move past their therapist-patient relationship. But that lie is just the start of all the trouble Maksim will have to face sooner or later, whether he likes it or not.
Maksim, Maksim, Maksim. I swear, the guy had me wanting to smack him upside the head a time or twenty. There's no denying how complicated of a man he was, and peeling back those layers was part of what made him such an interesting main character. He was loyal and protective but he was also very closed off, only sharing parts of himself that he felt were necessary, and that depended on who he was with. I tip my hat to Paisley because she was patient and understanding, both as his therapist and the woman he was with. Getting to their happily-ever-after wasn't easy, but once it was within their grasp, I couldn't help the whoosh of relief because Maksim and Paisley deserved it. Bonus points to seeing Aiden and Saige and how far they've come in their relationship, and getting glimpses into the dilemma that Ford has found himself in, which makes his story one that I'm highly anticipating! Kudos to the writing duo of Piper and Rayne for yet another great, entertaining read in their Hockey Hotties series. Four stars for The Trouble with #9.
---------------------------
Read my reviews for the Hockey Hotties series: