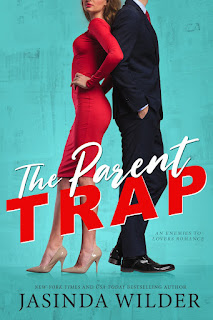 This note is bringing up inside me the stark, sharp reality that with Delia McKenna, I want the emotional foundation of a real relationship more--far more--than I want sex.

I barely recognize myself.

But, to echo what she said to me in the note--I like this Thai Bristow.

The arrogant, selfish prick is dead--

I hereby declare this book to be my new all-time favorite read from Jasinda Wilder! I thought I knew what I was going to get when I initially read the blurb for The Parent Trap, but it turned out to be so much more than I could have ever hoped for. Obviously, this book has nothing to do with the Disney classic flick with the same name (and one of my favorite films!) that starred Hayley Mills (or alternatively, Lindsay Lohan, depending on which generation you belong to). Instead, this is a story of a lifelong hate turning begrudgingly into like and then evolving into something even far more unexpected: love.
Cordelia McKenna has known Matthais Bristow all her life--and for more than half of it, he tormented her. He may have been her twin brother's best friend, but there was no love lost between Delia and Thai. When he finally went off to college, she got a reprieve from the name calling, fat shaming, and pranking. Years later, Delia is a force to be reckoned with, but when she finds out that Thai owns half of the construction company that she worked tirelessly to lay claim on, she's taken aback. Is she supposed to simply trust him when he claims that he's changed, or could this be yet another heartless prank?
This isn't my first Jasinda Wilder read, and I know full well what she's capable of as an author, yet she's left me gobsmacked with my two most recent reads from her: The Cabin and The Parent Trap. Her latest standalone brings this wonderfully balanced romance that was deliciously dirty while also being swoony and sweet, as well as having wit and humor matched with a healthy serving of angst. The main characters had some of the best banter and sexual tension in a book that I've encountered in quite some time. Delia and Thai were endearing, and The Parent Trap was a five-plus-starred gem of a fab read.
Release Date: 13 August 2021
Date Read: 11 August 2021
Learn more about Jasinda Wilder.
Purchase The Parent Trap on Amazon | Apple Books | B&N | Kobo.