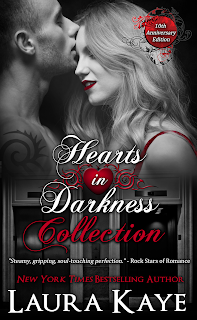 Just as his eyes drooped, she pressed a kiss against his collarbone and squeezed her arm across his chest. "I love...that elevator," she said.

With a sleepy smile and a full heart, he turned his head and kissed into her soft hair. "Aw, Red. I love that elevator, too."

It was in August of 2013 when I came across a novella that had two strangers finding a once in a lifetime connection inside a stalled elevator blanketed in darkness. That book was Hearts in Darkness, and it was my introduction to an author who has easily become one of my favorite go-to romance authors, Laura Kaye. Nearly two and a half years later, in January 2016, Kaye released the sequel, Love in the Light. Today, a decade after she originally published the first novella, Kaye releases Hearts in Darkness Collection, which not only consists of the aforementioned novellas, but two new short stories, Lovers at Dawn, which comes after Hearts in Darkness, and Forever in the Light, which comes after Love in the Light. If you're new to the series, you're in for a fantastic foursome to peruse.
Even after all this time, Makenna James and Caden Grayson remain one of my all-time favorite fictional couples. Getting to know them all over again while reading this collection was such a joy. She's a twenty-five-year-old forensic accountant, and he's a twenty-eight-year-old paramedic. They're first meeting was an ordinary occurrence that turned into a remarkable event in a matter of minutes. I'd never heard of forced proximity when I read the first part of their story in 2013, and now that I'm more familiar with romance tropes and sub-genres, I still feel that the author's take on this particular trope remains my favorite, and that's saying something considering how much I've read.
On its own, Hearts in Darkness was already an exceptional read, but with its sequel, Love in the Light, it's like getting the happily-ever-after compared to the more happy-for-now of the series starter. And now, with this anniversary collection, Laura Kaye gives fans and readers two short stories! Gah! Lovers at Dawn serves as a great in-between for the two novellas, while Forever in the Light is the sweet and swoony extended HEA that Makenna and Caden deserve, as do those of us who fell in love with them and their beautiful story. Experiencing their love story all over again with the two new stories felt like having a scrumptious sundae with extra chocolate sauce AND a cherry on top. So, if you're like me and have read Makenna and Caden's story before, I think you're going to want to get their entire love story in the Hearts in Darkness Collection, which I'm giving five-plus stars to.
Release Date: 24 August 2021
Date Read: 22 August 2021
Learn more about Laura Kaye.
Purchase Hearts in Darkness on Amazon | Apple Books | B&N | Kobo.