Review: Beneath the Fallen Stars by Kaylee Ryan & Lacey Black 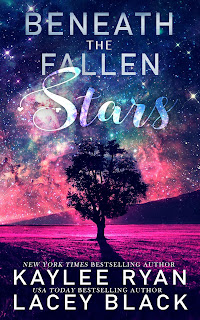 Note: An advanced reader copy (ARC) was provided by the authors via Give Me Books Promotions.
The writing duo of Kaylee Ryan and Lacey Black are back with a new novel that feels a whole lot like a new series starter--or maybe that's wishful thinking on my part. Beneath the Fallen Stars is a small town romance featuring an enlisted soldier serving his third tour and a jaded bartender who's been the target of gossipmongers. When twenty-one-year-old Ford Gregory decides to spend the first week of his leave with his best friend in the army, he had no idea he would be as awestruck with the guy's cousin as much as he was when he first meets her. Ford once believed that he would be a lifer in the army, but spending time with twenty-three-year-old Shayne Danner feels life-changing. But what sort of future could they even have, what with him leaving her after a week and deployed soon thereafter? Can love develop over a short period of time; can it survive the distance?
This was a lovely read, one that was swoony and was able to give me some major feels. I liked that Ford and Shayne were not expecting each other. What I mean by that is they were both taken aback when they first met, and it was clear that neither was prepared to have the sort of experience that could alter the rest of their lives. There wasn't a whole lot of drama, although there were certainly moments where these two had to battle through things like small town gossip, betrayal and abandonment, and niggling doubt. I appreciated that they did have their respective support systems, i.e. Ford's parents and twin sister and Shayne's aunt and uncle and cousins plus her boss. This book made me think of the song "Somewhere Out There" because even with the distance, Ford and Shayne were still together underneath the same sky. 4.5 stars for Beneath the Fallen Stars.
Release Date: 17 August 2021
Date Read: 15 August 2021
Learn more about Kaylee Ryan and Lacey Black.
Purchase Beneath the Fallen Stars on Amazon.