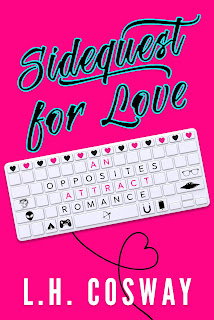 Note: An advanced reader copy (ARC) was provided by the author.
In a world where the usual can become mundane at times, I can always count on L.H. Cosway to provide the sort of romance that stands out--for all the best kinds of reasons. Sidequest for Love is her newest release, but while it is a standalone, it does share ties with Cosway's Running on Air series. That being said, I can safely say that you can, indeed, read this latest Cosway romance on its own. However, if you've yet to read the Running on Air novels, check those out as well when time permits because those are wonderfully awesome.
Sidequest for Love is a quirky romance that has two very different people strike up the unlikeliest of friendships and unexpectedly fall in love without realizing it. Afric O'Connor is a gamer with a wide following for her livestreams. When she's introduced to Neil Durant, they don't necessarily click. However, when she learns of an interesting dilemma of his, she decides to help him 'fess up to the girl he's been catfishing in exchange for him helping her get her finances in order sounds like a fair deal. But when that sidequest makes her realize that Neil deserves better than the girl he's after, Afric wonders if her true quest is to win his heart.
Ah, this book was a true joy. I adored every single thing about it. Seeing Afric and Neil go from strangers who didn't exactly have the best of first opinions of each other to allies who begrudgingly acknowledge maybe the other isn't as bad as they originally thought and then to friends who could maybe-possibly-absolutely have not-so-platonic feelings for one another was rather fascinating. There truly was an evolution as far as their relationship was concerned, but they also developed as individuals, especially Neil who came into his own. A true bonus was seeing some familiar faces pop in here and there throughout the story, not necessarily to steal the spotlight but to add even more flavor to an already fab story. Five stars go to Sidequest for Love!
Release Date: 03 August 2021
Date Read: 29 July 2021
Learn more about L.H. Cosway.
Pre-order Sidequest for Love on Amazon.