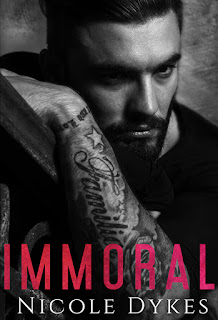 Note: An advanced reader copy (ARC) was provided by the author via Wildfire Marketing Solutions.
Prior to reading this book, Nicole Dykes was an author who I knew about because I'd come across her books in Goodreads but I'd yet to have the pleasure of perusing any of them. When the opportunity came along to read her newest novel, I considered the fact that it was her first foray into M/M romance as a sign, what with this particular sub-genre being my personal favorite. So, once Immoral hit my tablet, I dove right in, and oh boy, did I get so much more than I had been hoping for and how my expectations were surpassed rather loftily, what with some really strong writing from Dykes, a story that had my complete attentiond, and main characters who handily claimed all my affection.
Immoral introduces readers to two best friends, Grady Bell and Ryan Bailey. They were Bell and Bailey--or Bailey and Bell--and where one was, the other was sure to be around. They were each other's strongest source of support, and they'd made plans to go to college on their baseball scholarships. That is, until destiny had Grady heading off to California to sign a record deal. But before that, something happens between the two that changes everything, leading Ryan to leave without a word of goodbye to Grady post-graduation, cutting all ties in the process. Fast forward seven years, and both have storied lives. One is a professional baseball player on a championship run; the other is the frontman of rock selling out stadiums. When their paths cross once again, will Grady get to ask the questions he's had since that night seven years ago, and will Ryan answer him?
I try to keep my expectations when it comes to new-to-me or debut authors hopeful but also realistic. With Nicole Dykes being an author with several published titles under her proverbial belt, as well as a slew of positive reviews, those expectations grew. It turns out that I've been missing out because Dykes clearly knows how to weave the sort of romance that my heart craves for. Was my first read from her perfect? No, it wasn't, but it held me captive, from the moment Ryan and Grady were sitting together contemplating how divergent their paths were becoming at eighteen till they got their long-deserved happily-ever-after as twenty-five-year-olds. If I had to nitpick, it would be that I wished that there were more moments wherein we got to see Ryan and Grady doing more couple-like things outside of their respective homes rather than bits and pieces. Other than that, I was a very happy camper, erm, reader, which is why Immoral easily receives five stars.
P.S. Dare I hope for a book sometime in the future for Waylon, Grady's manager, and maybe even Jenny, Ryan's agent? Not together, of course, because hello...

P.P.S. Does Bennett Rochet, aka Ryan's closest friend and teammate, have his own book? Asking for a friend. That friend is me. Because if you can't be friends with yourself, then who else is going to want to be friend with you? Am I right, or am I right?
Release Date: 09 August 2021
Date Read: 07 August 2021
Learn more about Nicole Dykes.
Purchase Immoral on Amazon.