Review: Give Me a Reason by A.L. Jackson (Redemption Hills #1) 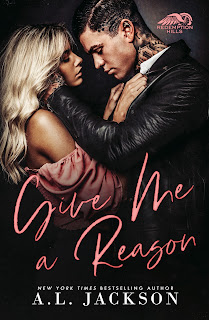 Note: An advanced reader copy (ARC) was provided by the author.
Could there be anything better for a reader than a favorite go-to author kicking off a new series? A.L. Jackson ended her most recent series back in February of this year, and here we are, just a little over six months since then, and she's got a brand-new series called Redemption Hills. The first book, Give Me a Reason, delivers such a strong beginning to the series AND it happens to have two of my favorite romance tropes: single parent and enemies-to-lovers. If you're new to Jackson, this series starter is a great introduction to her writing, plus there's just something about starting a series from the get-go, you know?
Give Me a Reason is the story of Eden Murphy and Trent Lawson. The first time he sees her, he knows hiring her to be a server at his club would be a mistake. She'd be nothing more than fodder for his patrons and the clientele the club caters to. He can appreciate her need to make some extra cash as much as he can appreciate what a temptation she is to him. When it turns out that she also happens to be his son's teacher, things begin to become complicated; but that's nothing compared to what he could be bringing her into if pursues his feelings for her. He wants to claim her as his, but what will it cost them both?
From the moment Eden and Trent meet, I was hooked. These two had tension brimming between them from the get-go, and all I had to do was sit back and immerse myself in their story. This had everything my greedy romance-reading heart desired--romance, sex, suspense, action, angst, wit, and some awesome writing and development, story-wise and character-wise, from A.L. Jackson. Add to that some highly notable supporting characters I'm eager to read more about as the Redemption Hills series goes forward. I love how layered the story line was and the ending was satisfying. Five stars for Give Me a Reason.
Release Date: 30 August 2021
Date Read: 28 August 2021
Learn more about A.L. Jackson.
Purchase Give Me a Reason on Amazon.