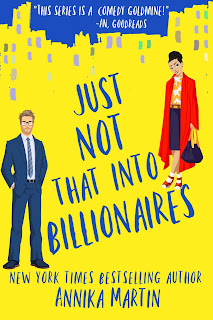 Note: An advanced reader copy (ARC) was provided by the author via Valentine PR.
Annika Martin is back with the sixth book in her Billionaires of Manhattan series, and it's a second-chance romance between two former kinda-sorta-maybe frenemies who were secretly crushing on each other a decade prior. When Just Not That Into Billionaires opens, Francine Janea learns her position in her ballet company's world tour is in jeopardy. It seems she can't get visas for certain countries because while she's stated on her information that she's single, it turns out that she's...not. Francine is actually married, and has been for the past ten years. Her husband is none other than Benjamin Stearnes, and while he was once a backend technician for a show where she was a twenty-one-year-old dancer, it turns out that Benny is now a billionaire and nothing like the twenty-two-year-old nerdy guy from before. When she asks him to sign off on their divorce, he agrees, but on one condition: She needs to attend to her wifely duties for three weeks--except in the bedroom--and convince everyone that she's his charming and loving spouse.
Ah, I so loved the twist in this story! It was like a marriage of convenience, but ten years down the road and without either Francine or Benny having seen each other in all that time. It was so interesting to see Benny's motivation for forcing Francine's hand so that she would agree to their...shall we call it a post-nup since it was for what would happen AFTER marriage ended? Anyway, these two were such opposites--she was effervescent and had a warmth to her while he was stoic and rather cold. Then we find out why he was the way he was with her, and why he had changed from the young man he was when they were in Vegas to who he was in New York. This was very much a slow burn romance, and itworked well because it allowed me to have a better understanding of Benny just as Francine was experiencing the same thing. The humor  and romance were spot-on, and I enjoyed the banter between these two, as well as Francine's interactions with her closest girlfriends. Just Not That Into Billionaires literally gets five stars. Literally.
-------------------------