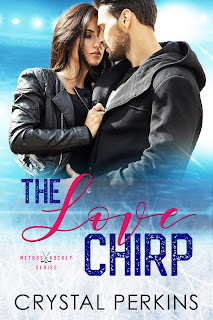 Note: An advanced reader copy (ARC) was provided by the author via Grey's Promotions.
Crystal Perkins is a new-to-me author and the series starter to her new hockey romance series from Lady Boss Press, Metros Hockey, was my introduction to both her writing and her Seattle-based professional hockey team. The Love Chirp is a second-chance romance featuring Neal Roquemore and Sarai Hedlin. He's a popular pro hockey player and she's an architect and interior designer. When Neal, better known by his nickname of Rock, is traded from New York to Seattle, he's asked about his opinion of the new sports facility being built for the Seattle Metros. His less than glowing review leads to backlash, but not towards him. Instead, the target is the building's designer. When he meets them in hopes of coming with a strategy to smooth things over, he's shocked to come face to face with Sarai--the same Sarai whose heart he broke ten years prior during their senior prom. Maybe they can come to a compromise when it comes to the facility's design, but agreeing they should give their relationship a second chance may be an impossible feat for Rock.
I so wanted to like this book more than I did; alas, it was not meant to be. Don't get me wrong, it was an okay read, one that I did finish in a singular sitting. Unfortunately, I did have my issues with it. Somehow, it felt rushed, even haphazardly so at some points. I'm all for fast-paced storytelling, but I also like being able to relish moments wherein Rock and Sarai were rekindling their romance, and I'm not talking about just the sex. The main characters also acted more like they were still teenagers than in their late twenties. It was rather frustrating seeing them go back and forth, hemming and hawing about choices and decisions to be made. The drama concerning their respective mothers would have had more of an impact if Rock's mother wasn't as unlikable as she was. There wasn't really enough regarding Sarai's brothers and Rock's personal assistant that piqued my interest, so I'm still on the fence on the rest of the series. Three stars for The Love Chirp.
Release Date: 03 August 2021
Date Read: 01 August 2021
Learn more about Crystal Perkins.
Purchase The Love Chirp on Amazon | Apple Books | B&N | Kobo.