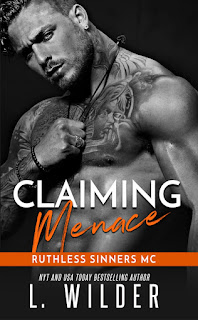 Note: An advanced reader copy (ARC) was provided by the author via Enticing Journey Book Promotions.
L. Wilder is one of the reigning queens of the MC (motorcycle club) romance sub-genre, and she's become one of my go-to authors over the past few years. She returns with the fifth book in her Ruthless Sinners MC series, and this time around, she gives readers the story of the club's computer whiz and hacker extraordinaire, Menace. When Jared Hughes was a teenager, he used his computer skills to help out a girl he had a thing for. He had no idea it would lead the infamous Ruthless Sinners to his door. Even more shocking was the fact that they wanted him to prospect for their club. This was a major turning point in his life, and he's been a proud member of the brotherhood since. When he meets a woman applying for a job at Stilettos, the strip club Menace manages on behalf of the Sinners. He may not realize that Aubrey Cash is his newest game changer, but what he does know is that he wants her...and that Aubrey is lying about who she is.
Ooh, but how these two had some awesome sexual tension sizzling between them! I loved that even though Aubrey was in fear for her life, she was also someone who refused to put others in harm's way and that she believed in righting wrongs. Jared/Menace was someone she needed on her side, but she was a tad resistant in the beginning, so there was this great push and pull happening between them, making for an even more intense connection. The suspense part of the story involves what happened to Aubrey's family a few years back, and how that's come back to haunt her. Naturally, once she's part of Jared/Menace's life, there's no way he'd allow any harm to come to her, and protective Jared/Menace is quite hot, thank you very much. As always, L. Wilder does a great job creating a story of romance and suspense with her own brand to it. I was truly entertained and can't wait to read more from this series. 4.5 stars go to Claiming Menace.
-------------------------
Read my reviews for the Ruthless Sinners MC series: