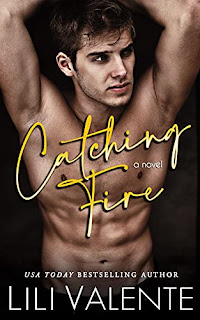 Note: An advanced reader copy (ARC) was provided by the author.
We're back in the small town of Bliss River, and Lili Valente's got the second book in her Hometown Heat firefighter romance series out and about. Catching Fire is a standalone featuring Mick Whitehouse and Faith Miller, both twenty-three. Mick is the younger brother of Naomi (All Fired Up, book one of Hometown Heat) and Maddie (Playing with Fire, book three of Hometown Heat), and has moved back with his sisters to their hometown after graduating from college. On the other hand, Faith is the lone female fighter in town, and she's good at putting out fires. Now, if only she could douse the heat that's been simmering between her and Mick ever since they had that first kiss of theirs.
Ooh, but how I enjoyed seeing these main characters try to resist each other, even though it was pretty obvious that their connection was of a whole different level than with anyone else they've ever been with. Faith was very independent and used to relying on no one other than herself. So, when you've got someone like Mick who helps people simply because it's the kind of person he is and he's a whole lot of interested, well, it has Faith battling between needing to be on guard and wanting to let her guard down. I liked seeing how much growth these two had throughout Catching Fire, which gets four stars.
Release Date: 06 August 2021
Date Read: 01 August 2021
Learn more about Lili Valente.
Purchase Catching Fire on Amazon | Apple Books | B&N  | Kobo.