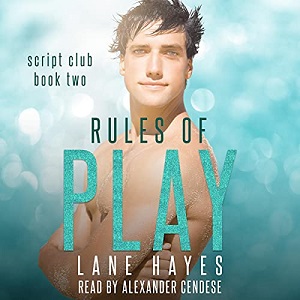 Note: The audiobook was provided by the author via IndiGo Marketing & Design.
Rules of Play is the second audiobook in the Script Club series penned by Lane Hayes and narrated by Alexander Cendese. This is George Murphy and Aiden Baker's story. George is twenty-four and a cape-wearing, book-loving, spooktacular genius in his last year of grad school, and Aiden is twenty-seven, a mechanic, and at his best when talking about baseball. When George is coerced by his boss to help him make a girl fall in love with him--a girl his boss thinks has a thing for George--he turns to Aiden. George assumes Aiden knows enough about love to help him out, but the only thing that Aiden knows for sure is that he's got a thing for his best friend's younger brother, aka George. But falling for George is against the rules. Right?
Just like with the first audiobook, Lane Hayes has written a lighthearted story that features the geeky guy and his friend's older brother who happens to be a jock, though in this case, Aiden is more of a former jock. I enjoyed getting to know both George and Aiden to the degree the story allowed us to. I wish that the author had delved a wee bit deeper into both main characters and that listeners were able to experience the actual growth of their relationship alongside them rather than it often being off-script. Alexander Cendese, however, delivered another impressive performance yet again. So, I'm giving four stars for Hayes's story and five stars for Cendese's narration, which results in an average rating of 4.5 stars for Rules of Play.
Date Listened to: 19 August 2021
Learn more about Lane Hayes.
Learn more about Alexander Cendese.
Purchase Rules of Play on Audible.