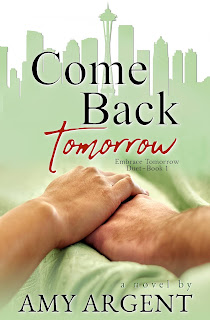 Note: An advanced reader copy (ARC) was provided by the author via Wildfire Marketing Solutions.
Come Back Tomorrow is the debut release from Amy Argent, and it's the first novel in her Embrace Tomorrow duet. I make no secret of my addiction to angst in the books I read, and this book offered it up in spades. One look at the official blurb and I knew this was going to be a heavy read, and I was all for it. I also went into this prepared, i.e. I had a box of tissues on the ready. Hey, I've been reading romance since I was like twelve, which basically means that I've been at this for three and a half decades (I kid you not!), so I've read more than my fair share of books, and not just romance. But what I'm basically saying is that experience has taught me to listen to my gut, and my gut was telling me that I was going to shed a few tears. So yes, tissues. And yes, they totally served their purpose.
It's been said that third time's the charm, but in the case of William Everson, Jr., his third bout of cancer was the proverbial tolling of the bell. He may have only been twenty-nine, but his body had been ravaged twice over, not just by the cancer killing him but the therapies that have been tried. He's done fighting what he feels is the inevitable; there's nothing worth fighting for anyway...not even himself. He's alone and prefers it that way. That is until Toni Somerset steps into his hospital room. The thirty-two-year-old clinical psychologist has heard about the terminally ill patient who has yet to receive a single visitor. She sees how resistant Will is to her being there. Over time, the trust grows and a kinship develops. It becomes far more, but will it be enough to give Will a reason to fight?
One of my favorite things about being able to read an author's debut novel who's been able to move me with what they've written is that I get to experience them at first blush and hopefully get to see them grow in their writing career over time. Amy Argent is an author to watch, and I don't make that pronouncement lightly. For a debut release, it appears that she's gone all in, choosing to write a story that isn't necessarily an easy one. The first part of Will and Tori's love story is already an intense read, putting my heart through its paces. It's clear that Argent has done her research with as far as the medical aspect goes. She's set the bar astronomically high with Come Back Tomorrow, which is why it gets five stars, and has made Whatever Tomorrow Brings quite highly anticipated.
Date Read: 12 August 2021
Learn more about Amy Argent.
Purchase Come Back Tomorrow on Amazon | Apple Books | B&N | Kobo.