Review: When We Were Reckless by Emery Rose (Lost Stars #3) 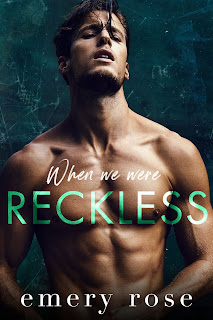 I think I already knew that I would get in too deep, and he was going to break my heart, but I did it anyway.

Love makes you reckless. All logic and reason flew out the window, and you let your emotions take the driver's seat.

You took your chances, pretending to be brave while you ignored the consequences.

Each time I think Emery Rose couldn't possibly outdo herself with this series, she does, and I, for one, am not complaining. This author has such a way with words, and she's beautifully woven yet another compelling romance, the third in her Lost Stars series. When We Were Reckless is all about Jesse McCallister and Quinn Cavanaugh. He's a twenty-seven-year-old motocross champion and youngest brother of Jude (When the Stars Fall, book one of Lost Stars) and Gideon and cousins with Brody (When the Storm Breaks, book one of Lost Stars) and Ridge; she's the youngest among a brood of four, only sister of Mason, Holden, and Declan. Jesse and Quinn were friends, but could they ever be more?
One of my favorite things about Emery Rose's writing is how rich her main characters' backgrounds are. Jesse decision to retire after a disastrous year both personally and professionally piques your curiosity as to what may have led to that and then continue digging to get ALL the answers. Then there's Quinn who has survived her own share of issues that have made her family, especially her brothers, very protective of her. The draw between these main characters was like this undercurrent of awareness, which I totally liked because I'm all about subtleness. But of course, there were all the perceived obstacles: the age difference, Jesse being best friends with Quinn's oldest brother, Jesse no longer believing in love, and so on. However, these two were meant to be, and there was no way I'd do anything except cheer Quinn and Jesse on towards their happily-ever-after.
Jesse was a really complex guy, and he was dealing with quite a bit. He blew hot and cold and was going back and forth with Quinn. And this is where she so deserves props because not only did she hold her own with him, but she refused to be treated like anything else than she deserved. She may have "only" been eighteen, but Quinn had a maturity and determination to her that I couldn't help but admire and applaud. Then there was both of them having close ties with their respective families, and while I'm assuming the remaining single McCallister guys will get their own books, I've got all my fingers and toes crossed hoping that Quinn's brothers get a spin-off series as well. I loved the angst, wit, and depth that When We Were Reckless offered, and it gets five-plus stars.
-------------------------
Read my reviews for the Lost Stars series: