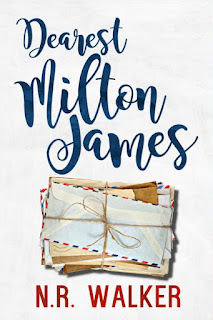 "'What I feel for you isn't wrong.'" I read the letter out loud, my voice soft. "'What we are when we're together isn't a sin. Love isn't a sin, Milton James. You tried to hide the shame in  your eyes, but I saw it. I hated how such at thing could mar the light in your eyes.'"

It says something when every single book I've read or listened to by N.R. Walker leaves me releasing a sigh of contentment when I've reached the end. As varied as her standalone stories and series have been, they've all resonated with me. Her latest novel, Dearest Milton James, was one that I went into blind, i.e. I had no clue what it was about. Had I based it on the cover, I would have surmised that it was a romance about two people corresponding but that there may have been some mix-up with the mail and someone else who wasn't named Milton James had received them. Well, from the moment I began reading, I realized that I had guessed wrong, and I have no regrets at all!
Dearest Milton James introduces readers to Malachi Keogh, a twenty-seven-year-old man who appears to have pushed his father to the brink--that being that he'd been fired one time too many. This leads his father, who happens to be the head of Sydney's postal service, to take Malachi to Mail Redirection Centre, otherwise nicknamed The Dead Letter Office. It's there that Malachi meets a quirky group of co-workers and his new boss who appears to have a thing for wearing brown, thirty-four-year-old Julian Pollard. Malachi doubts he'll last a day, but he surprisingly enjoys the work and finds his co-workers endearing. His crush on his boss is unavoidable, and when Julian asks him to help unravel the mystery of a collection of old love letters, there's no way that Malachi would even consider refusing. Maybe then Malachi can also figure out the mystery that is Julian.
I fell in absolute and utter adoration for this story and its characters. Gaaaaah! I lost count of the number of times I broke out in a grin or laughed out loud while reading this book. Then there were the moments where I felt my heart contract in empathy for "Dearest Milton James" and the young man who loved him so. I loved seeing Malachi come into his own as much as I loved how this stack of correspondence from the 1970s brought not just Malachi and Julian closer, but the entire Dead Letter Office team as well. This was truly a lighthearted read, one with nary a villain in sight or any sort of unnecessary drama-rama. While the release was a surprise to N.R. Walker's readers, what was not surprising was how marvelous a read Dearest Milton James was. Five-plus stars!
Release Date: 25 August 2021
Date Read: 25 August 2021
Learn more about N.R. Walker.
Purchase Dear Milton James on Amazon.