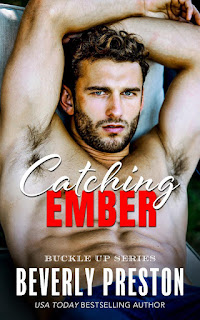 Note: An advanced reader copy (ARC) was provided by the author via Candi Kane PR.
Beverly Preston is a new-to-me author, and after reading this new series starter of hers, I can't help but wonder why it's taken me this long to read something she's written. Catching Ember is the first book in her Buckle Up series, and what a beginning it was. We're introduced to Ember Thompson and Nash Harris and the rest of the cast of interesting characters, some of whom proved to be rather endearing. There are recurring characters from Preston's Surviving Broken, book four in her Mathews Family series, but the author wrote this new book in such a way that I didn't feel like I was missing anything vital to the story of these new main characters. So yes, Buckle Up can be read on its own.
Twenty-six-year-old Ember Thompson finds herself like a fish out of water on a cattle ranch bequeathed to her by a father she only met for one brief moment five years ago. Leaving behind her life in California to spend four months in Texas was something necessary, not only to figure out if she would decide to keep or sell Walker Ranch, but to hopefully find some sort of connection to the father she wishes she had gotten a chance to know. Getting to know the people her father trusted most and the land he loved will be life-changing; however, getting to know thirty-four-year-old oilman Nash Harris may alter the course of her life as well, but could it also leave her with a broken heart as well?
This really turned out to be one heck of a good read! I enjoyed discovering this author's style of writing, and the story she had to tell was sweet, sassy, and steamy. Ember was such a great female main character. She was already someone who had a pretty strong foundation, what with being a good person who did her best not to judge others and loved with her whole heart, but there was still quite a bit of growth on her part. Of course, the same could be said for Nash, who may have wanted Ember's land in the beginning, but needed the fiercely independent woman more by the end. Catching Ember may have been my first Beverly Preston read, but it definitely won't be the last! 4.5 stars.
Date Read: 16 August 2021
Learn more about Beverly Preston.
Purchase Catching Ember on Amazon.