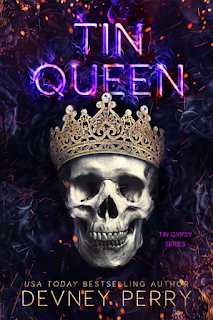 "Everything I know about you is a lie."

I knew this day was going to come, and as the publication date came closer and closer, there was that eagerness to finally read Emmett Stone and Nova Talbot's story mixed with the bittersweet reality of a beloved series coming to its inevitable end. If anyone wondered how Devney Perry was going to further raise the bar with her final Tin Gypsy novel, well, strap yourselves in and hang on tight, because Tin Queen is one heck of a ride.
Over the years, thirty-eight-year-old Emmett Stone has had a front row seat to the ups and downs the Tin Gypsies have gone through. This was the motorcycle club his father and his best friend's father dedicated their lives to--the same club that cost them their lives in the end. Engaging in a hassle-free affair with a gorgeous woman was just what he needed. No personal information exchanged. She was just Nova, and he was merely Ace.
Making her way to Clifton Forge, thirty-two-year-old Nova Talbot had a plan in place. She knew what she needed to do. Becoming involved with Ace wasn't supposed to be the distraction it was turning out to be. But now, unexpected feelings are making things all too complicated. They were never supposed to have a happily-ever-after together, not when the path towards a future was paved in blood and cemented with one lie too many.
Devney Perry has given her Tin Gypsy series an ending befitting a Tin Queen, as well as the Gypsy King, the Riven Knight, the Stone Princess, the Noble Prince, and the Fallen Jester. Emmett and Nova may have had a guaranteed HEA--this is a romance novel, after all--but their journey was bound to be complicated, what with the ties that entangled them, no thanks to the dark history between, not just two clubs, but two broken families.
The quote I chose from the book for this review could have been uttered by more than one character. The lies are plentiful, but they aren't necessarily just the ones that one main character gave the other. Could you imagine if the very foundation you've formed your belief or faith on was built out of lies? And just like in Tin Queen, while not all truths are easy, they ultimately set you free. Another truth? This book is a five-plus-starred read.
-------------------------