Review: About That Kiss by Harper Bliss 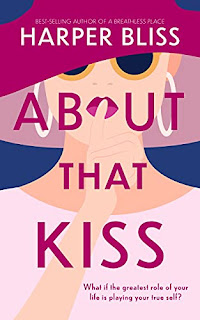 Note: An advanced reader copy (ARC) was provided by the author.
It's been quite a while since I last read something by Harper Bliss, but I certainly couldn't have chosen a better re-introduction to her writing than her newest novel! About That Kiss is a standalone F/F romance featuring two famous leading ladies who are about to work on their first film together. If you've read the author's Release the Stars, which was published in 2018, then you'll be happy to note that the main characters from there, Ava Castaneda and Charlie Cross, are part of this new book as well. That being said, both novels are absolute standalones, although I do think of this latest Bliss release as a companion novel of sorts to the aforementioned previous release. If you've yet to read Release the Stars, check it out when you have time because it was a rather good read, too.
When Faye Fleming finds out that Ida Burton is her co-star in an upcoming romantic comedy film, she's thrilled. Faye's achieved a great deal in her storied career, but getting to work with the legendary Ida would be such a highlight. They would play best friends in the film, with Ida playing a lesbian who has had feelings for Faye's straight character for years. They're both gifted actresses, so portraying gay characters shouldn't be a problem. But then, Faye absolutely has no idea just how true to her character Ida's been for years.
This was such a great read! Faye and Ida were intriguing main characters who most certainly endeared themselves to me whilst I was reading their story. Faye being straight and Ida in the closet made for an interesting setup to them working together on the movie since it was basically Ida portraying herself. My heart went out to her, and yes, it would be easy to say that she made the choice to stay in the closet all those years, but the fact that we live in a world where members of the LGBTQIA+ community still feel the need to "come out" rather than simply "be" simply adds on to the pressure for some to remain silent, wary of repercussions. Harper Bliss kept this story at a good pace throughout, and I appreciated the growth in Faye and Ida. 4.5 stars go to About That Kiss.
Date Read: 02 August 2021
Learn more about Harper Bliss.
Purchase About That Kiss on Amazon | Apple Books | B&N | Kobo.