Review: When the Storm Breaks by Emery Rose (Lost Stars #2) 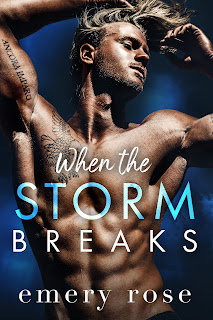 True bravery was looking into the eyes of the woman you loved and promising them forever. Despite the odds stacked against you, you'd be willing to risk it all for one more day, one more year, or if you got really lucky, an entire lifetime.

This weekend has put my heart through the wringer, and one of the people who needs to share the blame is Emery Rose. If I thought the Lost Stars series starter, When the Stars Fall, had my heart thumping wildly in my chest, well, the second book in the series refused to let the poor thing sit idly by and put my heart through its paces. When the Storm Breaks is Brody McCallister's story, and this cowboy meets his match in a rock star who was born and raised in the Bayou, Shiloh Leroux. The twenty-five-year-old singer and songwriter is taking a much needed break in the middle of a world tour, one that's she's planned for quite some time. There's a reason why she's headed to Texas instead of some exclusive spa and resort, and single father Brody is key in helping her make peace with a choice she made at eighteen. Shiloh has six weeks to get it done; it took less time for her to fall in love with Brody. But at the end of six weeks, do they come to an end, too?
Brody and Shiloh had that perfect combination of being entertaining and endearing, and their story had me absolutely engrossed from start to finish. I loved the push and pull with these two! There was this zing between them that leapt off the proverbial page, and as much as they tried to deny it, their falling into bed and then falling in love with each other was rather inevitable. Aside from their relationship, it was interesting to see the dynamics between Brody and his family and then Shiloh and her brother, as well as the others who they were close to. (Side note: I'm hoping for a couple of non-McCallisters to get their stories told sometime in the near future! Fingers crossed!) They were such different people, but at their core, these two were all in with those who mattered most, loving and protecting those chosen few fiercely. There were a couple of twists that made the story intriguing, holding my attention even more. The happily-ever-after was very much Brody and Shiloh--as it should be--and When the Storm Breaks gets five-plus stars!
-------------------------
Read my reviews for the Lost Stars series: