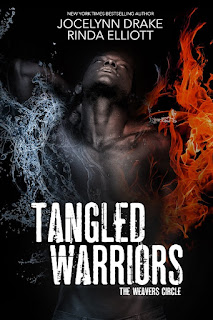 Note: An advanced reader copy (ARC) was provided by the authors via IndiGo Marketing & Design.
It's often been said that oil and water don't mix, and then there are quotes about fire and ice. But what about fire and water, or more specificially, the Fire Weaver and the Water Weaver? For those of you out there who have yet to be acquainted with all things Weavers Circle, this is an urban fantasy series penned by the awesome twosome of Jocelynn Drake and Rinda Elliott, and we're now four books in. Tangled Warriors is an M/M/M story, one involving two of the Weavers, Lucien Cummings (aka the Fire Weaver) and Calder Saito (aka the Water Weaver), and Gio Russo. a guy they meet at a bar and invite to join them in a threesome. The connection the three share is scorching hot, but will that all be doused by the reality that there simply is no way for the three of them to work out as a throuple, not when there's the matter of fated mates and all the pestilents?
Confession time: Romances that involve throuples are not a favorite go-to of mine. It takes A LOT to convince me that all three individuals in a said three-sided arrangement or relationship are on equal footing, whether it be M/M/M, M/F/M, M/M/F, F/F/M, F/M/F, F/F/F, etc. You get the idea. A select few have been able to convince me, and then there are the rarefied few that have made me fall in love with their throuples and their stories. Jocelynn Drake and Rinda Elliott managed to do exactly that Waking Bel, the third book in their Lords of Discord series; and now, they've done it again with Lucien, Calder, and Gio's story in the Weavers Circle series. This had all the heat I could have wanted times three. Add to that the action and suspense and loads of tension all throughout. Giving Tangled Warriors five stars was such an easy thing for me to do. Bring on the Air Weaver!
-------------------------
Read my reviews for the Weavers Circle series: