Book Spotlight: Got Me Hoping by Casey Cox 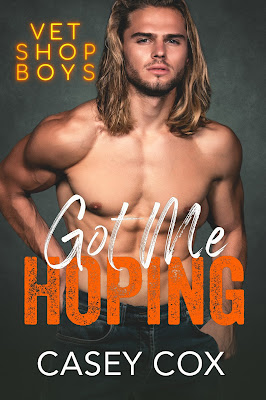 Got Me Hoping
(Vet Shop Boys #1)
by Casey Cox
Date Released: August 23, 2021
About Got Me Hoping
It's just a one-night stand, they said. It'll be simple, no-strings fun, they said. They. Lied.
I'm done with love and being broken-hearted. The only dogs I want to deal with are the ones I treat in the veterinary clinic I work at.
But at thirty-four, having my first one-night stand can't hurt. Right? The rules are pretty simple.
1. Don't spend the night.
2. Don't see him again.
3. Don't share anything personal.
4. Don't fall in love with him.
But when Haze, the guy I spent a blazing hot night with and haven't been able to forget about, shows up as our new receptionist, the rules fly out the window.
There's no way one night could lead to anything more. So why has Haze got me hoping this might just last?
Got Me Hoping is book 1 in the Vet Shop Boys series and can be read as a stand-alone. Expect plenty of humor, found family, an adorable golden retriever, a foul-mouthed parrot, a whole new way of getting clean (as well as very, very dirty) and a heartwarming happily ever after! 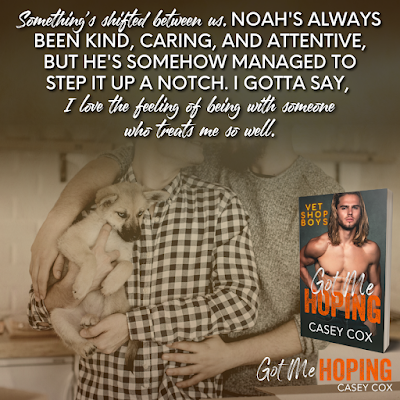 Read my five-starred review of Got Me Hoping.
Add Got Me Hoping on Goodreads.
Purchase Links
Amazon US | Amazon UK | Amazon CA | Amazon AU
(Free with Kindle Unlimited!) 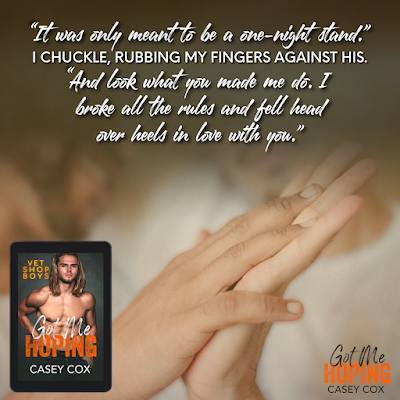 An Excerpt from Got Me Hoping
All my bravado from the bar last night is gone. All that's left are memories of an incredible night colliding with the bleary morning light of the day after. His eyes soften, and he leans in toward me right as I glance over at the table. Oh, shit. Noah was going to kiss me. I turn, inching my lips closer to his face just as he starts to move toward the kitchen. He backs up, but trips over his feet.
Not. Awkward. At. All.
"Plates," I say, slapping my hands against my thighs way too hard. "Let me help you get some plates." Yeah, because carrying two plates a few feet is definitely a two-man operation.
A few moments later, we start eating. I ended up carrying both plates and bringing the cutlery, too...so, that's a good thing? Man, I really suck at this. There's a reason why I never spend the night.
I haven't had many hookups since Daniel broke up with me. With other guys, it's always been sex followed by a quick goodbye. I never hung around afterward. One time I showered and watched half an episode of Unbreakable Kimmy Schmidt, but that's about it.
But for some reason with Noah, there's a part of me that doesn't want to leave. It makes no sense. We glance up at each other every so often while we eat, sharing a silent exchange that I can't explain.
The only sound in the kitchen is us chewing and Buddy breathing loudly at Noah's feet. I liked it a whole lot more when other sounds were filling the space around us. But I guess that's all in the past. Once we get through the nominee for Most Awkward Breakfast at the One-Night Stand Awards, that's all this will ever be.
A memory.
My heart sinks at the thought. 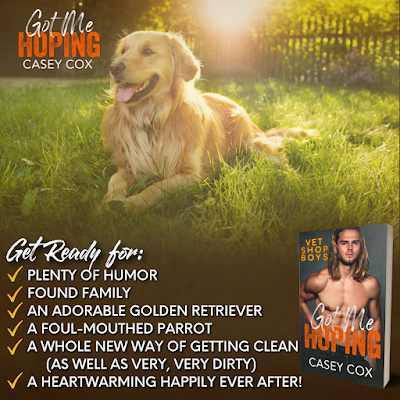 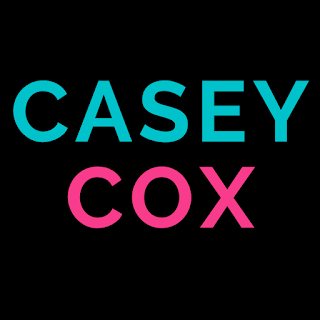 I've been wanting to do this 'authoring' thing since forever. But this thing called 'life' kept getting in the way. And then this thing called 'turning 40' happened. Eep!
So I did what any responsible newcomer to middle-age-hood would do: I quit my day job, started drinking copious amounts of coffee, and reconnected with my life-long passion—donuts, err, I mean writing.
So here I am. And there you are... Hello!
I live on the east coast of Australia, I'm the proud paw-rent of two of the most utterly adorable French Bulldogs, Ralphie and Lilly, and when I'm not writing, you'll most likely catch me down at the beach (I'm the one drinking Rosé and eating donuts while other people are doing healthy things like 'walking' and 'swimming').
Connect with Casey
Website | Facebook | Facebook Group | Instagram | Goodreads | BookBub | Amazon | eMail 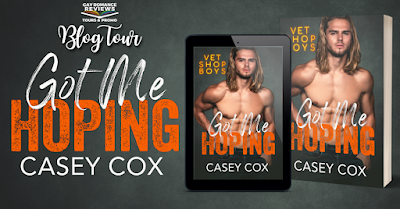