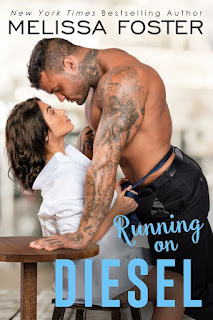 He lifted her to her feet, and the truth came tumbling out. "You destroy me, baby girl."

"I don't want to destroy you," she said softly. "I want to make you whole."

Aaand I've just finished reading my favorite book in Melissa Foster's The Whiskeys: Dark Knights at Peaceful Harbor series. This story and these characters just slayed me--in the best way possible, of course! Running on Diesel, which could be read as a standalone--but why do that when you could get to know Peaceful Harbor's Whiskey clan, the Dark Knights motorcycle club, and their partners by reading the first eight stories in the series?!--is the story of twenty-six-year-old Tracey Kline and thirty-two-year-old Desmond Black, aka Diesel. She's a waitress at Whiskey Bro's; he's a Dark Knights nomad who's temporarily tending bar at the same establishment. She was in a bad relationship that cost Tracey her only family but is beginning to consider Peaceful Harbor as her new home, and he lost his only family years ago and hasn't had a place to call home since then. Can these two open themselves to the possibility of a future together while also learning to come to terms with unexpected revelations regarding their respective pasts?
I'm finding it difficult to name every single thing I loved about this book, mainly because, if I'm being absolutely honest here, it was the book in its entirety that I adored. From the main characters who overcame loss and adversity to the story that captured my heart and then everything in between, I was all in. I'd be hard pressed to nitpick and try to pinpoint something that fell short of my expectations. I've said this before and I'll say it again--Melissa Foster has mastered the craft of writing romances that are founded on family, community, and love. The proof is in the slew of interwoven series that she's created and published, the latest being Tracey and Diesel's story. Eight novels and one novella in, and I'm still eager to read more from The Whiskeys: Dark Knights at Peaceful Harbor series while also being absolutely excited for the upcoming spin-off, The Whiskeys: Dark Knights at Redemption Ranch. That says something about Foster's ability to keep readers invested in her tales and characters. Five-plus stars for Running on Diesel.
--------------------------

Read my reviews for the Whiskeys: Dark Knight at Peaceful Harbor series: