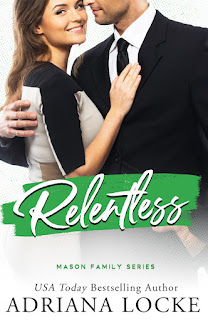 Note: An advanced reader copy (ARC) was provided by the author.
Adriana Locke takes readers and fans back to Savannah, Georgia with the fourth novel in her Mason Family series. Relentless is the story of Oliver Mason, co-chief executive officer of family-owned Mason Limited. When someone crashes into him, any worry about his Range Rover is overshadowed by his instant attraction to the woman behind the wheel of the vehicle that hit him. Shaye Brewer is gorgeous, and it's very possible that she's just as drawn to Oliver. However, when he asks for her number, she chooses not to give it to him. Rejection isn't something Oliver is all that familiar with, but maybe Fate is on his side because Shaye ends up being the most qualified applicant for the position of his executive assistant. There's no denying she's an absolute asset to Oliver in the office; neither can he deny that she's what's been missing in all other aspects of his personal life. But secrets and past trust issues may prove disastrous for these two if they allow them to.
I admit that I have a thing for male main characters whose name is the same as my beloved fur baby, Oliver, but even if Oliver Mason had a completely different name, it would have been impossible not to be smitten with him. He was sweet and protective when it came to his mom and Shaye, teasing but supportive with his brothers, and a demanding but fair boss. Of course, Shaye wasn't someone to be trifled with either. She was independent and smart, a wee bit stubborn, and she was loyal to those closest to her. Together, Oliver and Shaye had great chemistry and the witty and flirty banter was a plus. If I had to nitpick and say what I wished there was more of, it would have to be quieter and more intimate--and by intimate, I don't necessarily mean just sex--moments and interactions to highlight the deepening of their relationship from lusty lovers to committed partners. Other than that Relentless was a highly satisfying, 4.5-starred read.
Release Date: 03 September 2021
Date Read: 01 September 2021
Learn more about Adriana Locke.
Purchase Relentless on Amazon.