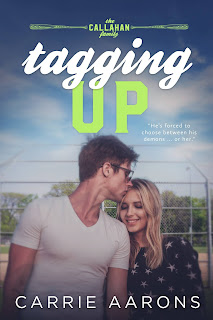 Note: An advanced reader copy (ARC) was provided by the author.
Tagging Up is the fifth and final book in the Callahan Family baseball romance series from Carrie Aarons. This features the youngest Callahan cousins, twenty-three-year-old Anna Callahan, and star pitcher for the Packton Pirates, thirty-year-old Clark Nyle. Anna loves and appreciates her family, but the time has come for her to insist on her independence. While she's proud of the legacy the Callahans continue to grow upon, she's on a different path. She's itching to move out, move on, and move forward, and she wishes that her family would be a bit more effusive and supportive. Maybe hooking up with the one guy she shouldn't even consider hooking up with will help de-stress and distract her. It's just a one-time thing anyway, especially given that Clark isn't exactly pro-relationships. But then that was before he got a taste of his best friend's younger cousin...
Anna and Clark's story provided a nice ending to what's been an interesting and entertaining series. The seven-year age difference wasn't what I would consider a wide gap, at least not wide enough to cause controversy or anything of the sort. If anything, it was the fact that Clark was Walker's best friend and that Walker was Anna's cousin. There was also their respective issues with their families--Clark's being more angsty compared to Anna's overly protective brood--and Clark not exactly having a stellar record when it came to dating and commitment. I liked seeing their growth as individuals, especially Clark, who was a really good guy who simply never thought himself worthy to be like his closest friends who had found love and were all settling down. I loved seeing everyone together, making Tagging Up a 4.5-starred ending to the Callahan Family series.
-------------------------
Read my reviews for the Callahan Family series: