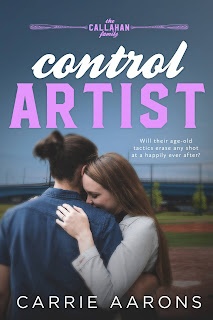 Note: An advanced reader copy (ARC) was provided by the author.
Control Artist is the fourth novel in Carrie Aarons's Callahan Family series, and this time around, readers get Garrett Chaser and Dahlia Akana's story. He's a twenty-three-year-old rookie who knows just good he is when it comes to the most important thing in his life: baseball. She's a twenty-six-year-old trying to find her place in the world, but even with her wanderlust, she's biding her time playing babysitter to her nieces. Garrett's used to women falling at his feet, but Dahlia isn't like any of the other women who have caught his attention. This time around, he feels the urge to sweep her off her feet, but it's going to take more than his usual MO. Their connection is one that demands commitment and patience, but just when it looks like they're on their way there, Garrett's past comes calling and the fallout from the bad press is intent on taking both him and Dahlia down. When things get difficult, will Dahlia choose to stay by Garrett's side or run away?
This book now shares second spot with Stealing Home on my list of favorites in the series. I thoroughly enjoyed Garrett and Dahlia's story. These two were flawed and had A LOT of growing up to do, but if I wanted picture perfect main characters, then I'd watch a Disney movie with fairy tale princesses and their charming princes. This was a fairly lighthearted romance with moments punctuated by angst and heartrending challenges to their relationship. I appreciated the direction that Carrie Aarons decided to take with the story, and I think that where Garrett and Dahlia ended up was what was perfect for them. I also liked catching up with the other couples in the series. After all, there's an attachment to them already after having fallen for them while reading their own journeys to their respective happily-ever-afters. I'm giving Control Artist 4.5 stars and I'm looking forward to the upcoming fifth book in Aarons's Callahan Family sports romance series.
-------------------------
Read my reviews for the Callahan Family series: