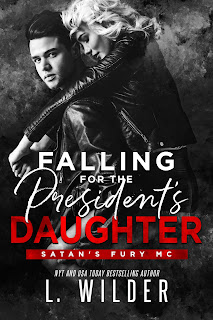 Note: An advanced reader copy (ARC) was provided by the author via Enticing Journey Book Promotions.
When I found out that L. Wilder was going to dive back into the original Satan's Fury MC series, I may have been a wee bit giddy with excitement. This was, after all, the series that introduced me to Wilder's writing over five years ago--the same one that got me hooked on said writing. And now, more than three years after the last book, we're back with Cotton and the rest of the club! Yes, the guys are ever-present, but Falling for the President's Daughter, which is the ninth Satan's Fury MC book, is about Cotton's adopted daughter and the grandson of the club's neighbor. This can be read as a standalone, if you so choose to do so, but fair warning: there are details in the new book that could very well turn out to be spoilers for the first ten stories.
Twenty-three-year-old Lauren (I don't think her last name was mentioned, and when I went to check my review for Cotton, I didn't mention Cotton's last name either, which makes me think his wasn't in his book as well.) is the "president's daughter" in Falling for the President's Daughter, and twenty-six-year-old Flynn Michaels is the one who does the "falling". It was more than a decade ago when Flynn found himself abandoned by his mother and living with his beloved grandmother instead, and he looked over the fence to see a girl who was rescued by the Satan's Fury motorcycle club and later go on to be adopted by the club's president and his ol' lady. Lauren and Flynn were neighbors and became close friends. For years, Flynn had stronger feelings for her. She left for college without his getting to confess how he felt. But now, she's back...
I seriously liked this book! I love that Lauren got her happily-ever-after, especially after everything that she went through prior to being rescued by the club and adopted by Cotton and Cass. I think that it was interesting to have a book that wasn't about any of the still single brothers, yet having the club there, their presence constant but never intrusive. Flynn and Lauren may have had long-held feelings for each other, but I do think that the timing was better for them as adults and made for a better story rather than the usual teenage love and then having to part ways. 4.5 stars for Falling for the President's Daughter. I hope Q's next!
-------------------------