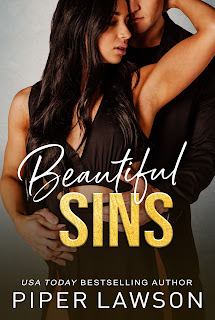 Note: An advanced reader copy (ARC) was provided by the author via Wildfire Marketing Solutions.
Beautiful Sins is the second book in Piper Lawson's Enemies series, and it picks up after the events of the series starter, Beautiful Enemy. These books MUST be read in order because of the continuing story line. The conclusion to the trilogy, Beautiful Ruin, is due for release in the second week of August, so if you're the type that prefers to read a series once all the books have been published to spare yourself the stress of dealing with cliffhangers and the waiting game, you've got about a month and a half still ahead of you.
Raegan Madani knew she had only one choice to make after being with Harrison King--she left. Getting as far away as she could from the one man who made her world tilt on its axis was necessary. But it seems like Fate has other plans. Rae and Harrison are back in each other's orbit. Things may have started in Ibiza, but now, they're both in Los Angeles. The pull to him is stronger than ever, but in order for them to have any sort of future, Harrison may have no option than to face down his past. Hopefully with Rae by his side.
Unsurprisingly, both Raegan and Harrison still had their stubborn streak going in this second Enemies book. Neither of them wanted to be seen as the one "giving in", but there was also no denying just how drawn they continue to be to each other. The pace of the story remained quick, and I did like seeing that there was that constant development as far as their relationship was considered. Naturally, this being a trilogy and all, Beautiful Sins ending on a cliffhanger wasn't a shocker, and now the countdown begins. Four stars.
-------------------------
Read my reviews for the Enemies series: