Review: To Sir, with Love by Lauren Layne 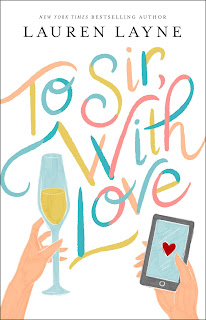 Note: An advanced reader copy (ARC) was provided by Gallery Books via Valentine PR.
Lauren Layne's newest standalone may share the same title as E.R. Braithwaite's literary classic--which was adapted into one of my all-time favorite films with Sidney Poitier as the lead--but the story has more hints of The Shop Around the Corner and You've Got Mail than the 1950s novel and 1960s movie I mentioned. To Sir, with Love is a romantic comedy features Gracie Cooper and Sebastian Andrews, two thirty-somethings who share an undeniable connection online but they turn out to be on not-so-friendly terms offline.
It's been quite a while since I last read something penned by this author. Not because my last read of hers was dreadful, but more due to not being able to keep tabs on every new release that authors whose work I enjoy. If anything, I've been entertained by almost everything that I've read from Lauren Layne, so when I learned about her newest novel with Gallery Books, I knew I had to carve out some time to get my hands on it and read it.
To Sir, with Love was a sweet read that had an enemies-to-lovers feel to it, although calling the main characters "enemies" is a bit of a stretch since it felt like the animosity was more on Gracie's end than Sebastian's. The story was fast-paced and there was certainly enough romance and comedy to keep me satisfied from start to finish. While this may not be my favorite read from Lauren Layne, it was enough that I was engaged in everything that it offered up, and served as a reminder of why I liked this author's writing as much as I did in the recent past. I'm giving this rom-com standalone four stars.
Release Date: 29 June 2021
Date Read: 29 June 2021
Learn more about Lauren Layne.
Purchase To Sir, With Love on Amazon | Apple Books | B&N | Kobo.