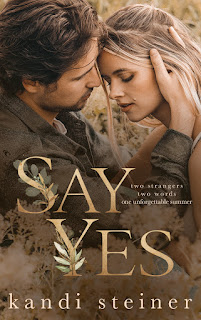 Note: An advanced reader copy (ARC) was provided by the author via Valentine PR.
Kandi Steiner's latest release is a standalone, and it's set in 1996 in Italy. Say Yes is the story of Harley Chambers, a twenty-two-year-old art student who has a penchant for making sure everything in her life is pristine and perfect, including her art. Her professor, however, offers up some advice, noting that perfection isn't all it's chalked up to be. So one night, Harley challenges herself to say yes to anything and everything, giving herself until sunrise to do so. She never considered the possibility she'd cross paths with Liam Benson, a fellow artist and her twenty-eight-year-old classmate. Her opinion of him has never been all that great, but when he learns of her "say yes" plan, he has no qualms about hijacking it. What happens when Harley ends up wanting more than just one night, and will one summer suffice even though she knows Liam will probably run?
I quite enjoyed this blast from to the not-so-distant past! Harley and Liam's story was set in 1996, which made me twenty-two and already two years past college graduation and working as a preschool teacher. Ah, those were happy times. But I digress! Seeing Harley discover a side of herself that she never even contemplated existed was a highlight of this book, but the absolute star had to be the backdrop. Kandi Steiner's writing made it easy to picture Florence, a place I've never been to but one that my mom has described as enchanting. I do wish, however, that Liam's perspective had been included, especially considering that he was someone who went through his own sort of evolution. Not all books demand dual perspectives, but I just feel that it would have benefitted the story overall. Still, all things considered, Say Yes is a highly satisfactory read. It gets four stars.
Release Date: 24 June 2021
Date Read: 24 June 2021
Learn more about Kandi Steiner.
Purchase Say Yes on Amazon.