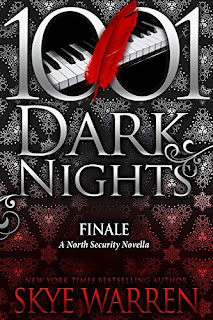 Note: An advanced reader copy (ARC) was provided by 1001 Dark Nights via Social Butterfly PR.
Someone hand me a fan because this novella turned out to be waaay hotter and kinkier than I expected! That's saying something because experience has taught me that Skye Warren knows how to write a steamy romance! Finale is part of the North Security book universe, but it can pretty much be read as a standalone since whatever ties it has with any of the previous books are very loose ones, so you won't feel lost or clueless if you happen to be new to either this specific book world or this author's writing in particular.
Isabella Bradley is more than the socialite and heiress the public thinks she is. She's whip smart and she's what's keeping the family-owned hotel chain still up and running. Unfortunately, they need an influx of funds, no thanks to her father's bad spending habits. The solution could come in the form of a deal with Francisco Castille, the exiled Duke of Linares. However, he's got a whole different kind of agreement in mind. He needs an heir, which means he requires a wife, and who better to be exactly that than the woman he's had his eye on since he first saw her three years ago? Will Isabella sign on?
This was a great addition to Skye Warren's North Security book universe. It may have been a quick read, but it had a good story and two intriguing main characters who went from strangers to a married couple but all the love and trust came in post-wedding. There's quite a bit of kink--admittedly more than I was expecting considering how short the book is. I'm not saying that's a bad thing, but more of it took me by surprise. There's a hint of angst, but anything that needed resolving was done with in quick fashion and without a whole lot of drama. The epilogue definitely brings in most of the "sweet" kind of romance, so it does counterbalance the steam quite nicely. I'm giving Finale four stars.
Date Read: 30 May 2021
Learn more about Skye Warren.
Purchase Finale on Amazon.