Review: My Rebound by Carrie Ann Ryan (On My Own #2) 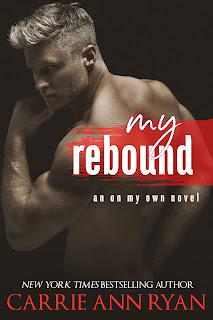 Note: An advanced reader copy (ARC) was provided by the author via Give Me Books Promotions.
It goes without saying that Dillon Connolly's book was my most anticipated read going into Carrie Ann Ryan's On My Own college romance series. When Dillon's housemates were introduced in the prequel novella, My First Glance, I was curious about all four of them because Ryan gave just enough to have me itching to get to know these guys more. Now, by the end of the full-length series starter, My One Night, the housemates where whittled down from a total of five, including Dillon, to four. I won't say why because I refuse to be the one who spoils the first novel for readers who have yet to peruse it. What I will say is that after reading My One Night, Pacey Ziglar was the housemate I so needed to read more about, and that's due in really large part to their friend, Mackenzie Thomas.
Carrie Ann Ryan is a master when it comes to character development, and she showcases her mastery once again with Pacey and Mackenzie. These two may have started out knowing full well that one was going to be the other's rebound. Now, a lot of rebounds don't necessarily evolve into committed relationships, particularly one as complicated as Pacey and Mackenzie's. There's quite a bit of history on both their ends, and they have things that they're dealing with. So imagine adding to that feelings that were not supposed to be there, but the heart wants what it wants. As always, there's some angst here, but Carrie Ann Ryan balances things out nicely with notable lighthearted moments, not just between Pacey and Mackenzie but with their respective but intertwined circles of friends. Ryan keeps up the pace (pun not intended) with My Rebound, which gets 4.5 stars.
-------------------------
Read my reviews for the On My Own series: