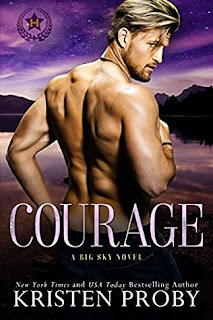 Note: An advanced reader copy (ARC) was provided by the author via Valentine PR.
Kristen Proby takes fans and readers back to Cunningham Falls, Montana with the newest series in her Big Sky book universe. Heroes of Big Sky shines the spotlight on men in uniform in the small Montana town. Things kicked off with Honor, which is a free novella, and now, we've got our very first full-length novel, Courage. Natasha Mills and Sam Waters' story begins on a tragic note, with the sudden passing of Sam's younger sister, Monica, who happens to be Tash's best friend, and brother-in-law, Rich. Tash and Sam are named legal guardians for Monica and Rich's twins, Kelsey and Kevin. Dealing with the loss of Monica and Rich is difficult, and raising five-year-old twins with the person you've been crushing on for years is complicated. But co-parenting leads to Tash and Sam becoming closer, making them feel like family. When Sam's lifelong dream is within his grasp, will it mean letting go of his brand-new dream...with Tash and the kids?
One of the best things about Kristen Proby is how she seems to be so darn capable of creating story after story in a book world that her readers have fallen madly in love with. She does it with her addictive With Me in Seattle series, as well as her beloved Big Sky book universe. This was a surprisingly lighthearted read, one that did have its angsty and heavier moments, but wasn't mired with too much drama. I enjoyed the romance between Tash and Sam, but it was seeing them become a family with Kelsey and Kevin that I totally relished. With a four-starred start to this series, Courage has set the bar high.
Release Date: 21 June 2021
Date Read: 19 June 2021
Learn more about Kristen Proby.
Purchase Courage on Amazon | Apple Books | B&N | Kobo.