Review: Something About You by J. Nathan 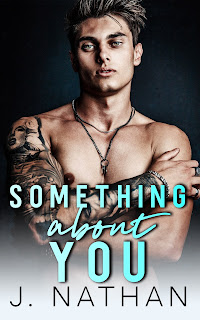 "I don't need to try to be other people's idea of pretty. I just need to be me. Someone will love me for me."

J. Nathan is one of my favorite go-to authors, and for good reason. Her writing has proven to be consistent and rather impeccable as far as I'm concerned. I've yet to come across a story and characters of hers that haven't resonated with me in one form or another. Her latest college romance has the makings of a fabulous series starter--and yes, maybe there's a bit of wishful thinking on my end since I haven't heard if this is really the first in a new series, but hope springs eternal! Nathan's given readers a great cast of characters which includes supporting characters who I absolutely need to get to know more about!
Something About You is a romance with enemies-to-lovers slash opposites attract vibes to it. Eighteen-year-old Shay Miller is a freshman with a full scholarship, and she has no intention of becoming distracted, not when being in college is hard opportunity to start fresh. She may have found a friend in her roommate, but not everyone is as welcoming. When snowboarder Kason McCloud is in danger of not graduating unless he passes physics, he blackmails Shay, the smartest student in class--the same one he slammed the door on when she asked him to keep the music down. She can't stand him and he doesn't get her, but if they pay attention, they may see why they're exactly what the other needs.
There's just something about this book... Okay, not just "something" but several "somethings". J. Nathan's writing doesn't make me feel like she's telling me story; it's more of her allowing readers like me to feel as if we're experiencing Shay's story and Kason's story and how those intersect and entwine. They have secrets and complications and moments where they hurt each other, but the choice to see instead of look, to listen rather than just hear, and to make a stand and not merely stand by were what helped them overcome all the hurdles that were set before them. I was moved to the point of tears a couple of times, but there were countless times I found myself smiling while reading Something About You. It gets five-plus stars. Fingers crossed for an actual series!
Release Date: 13 June 2021
Date Read: 12 June 2021
Learn more about J. Nathan.
Purchase Something About You on Amazon | Apple Books | B&N | Kobo.