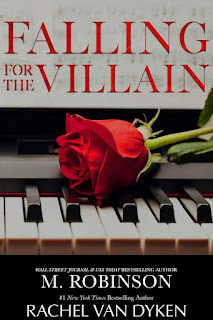 Note: An advanced reader copy (ARC) was provided by the authors.
After the cliffhanger ending of Mafia Casanova, Falling for the Villain immediately became one of my most anticipated reads for 2021. The original cover for the upcoming book had me thinking it was in the same vein as its predecessor, and the change of cover didn't hit me until I was done reading. Admittedly, the change was apt, but it was the tone and direction of the story itself that caught me most unaware. Authors M. Robinson and Rachel Van Dyken do note before the story begins, as they do in the official blurb, that this may not be everyone's cup of tea and have some feeling uncomfortable, so heads up!
Four years of patience have finally been rewarded with the kidnapping of twenty-two-year-old Juliet Sinacore. She has no idea why she was taken, but what she slowly begins to realize is that the twenty-eight-year-old man who demands she call him "Master" and coaxes her to play the piano for him has a side to him that he keeps hidden. The more time she's with him, the more the fear evolves into something else. She may have been a mafia princess all her life, but now, her life is no longer her own. As much as she is falling for her captor, he's pledged to never fall in love with her. What future could they ever have when Juliet learns why Donovan set his sights on her and the ties that bind them?
It took me a while to try and properly convey how this book made me feel and what I thought of it. Admittedly, dark romances that involve BDSM and captivity aren't my go-to, although there are several notable ones that have captured my attention. There's no denying that M. Robinson's and Rachel Van Dyken's writing in Falling for the Villain was noteworthy. The warning they gave regarding this being an uncomfortable read for some proved to be true for me at quite a few points. This wasn't an easy read, and there were moments where Juliet being a "pet" and Donovan her "master" and everything that was being done to her gave me pause. There was also more to the story than the kink, which is why I endeavored to read every page, and all things considered, this does get four stars.
Release Date: 22 June 2021
Date Read: 21 June 2021
Learn more about M. Robinson and Rachel Van Dyken.
Pre-order Falling for the Villain on Amazon | Apple Books | B&N | Kobo.