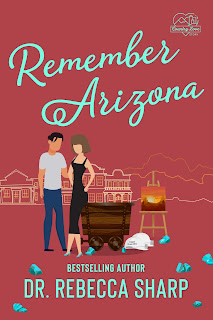 Note: An advanced reader copy (ARC) was provided by the author via Wildfire Marketing Solutions.
Dr. Rebecca Sharp takes readers back to her Country Love series with the seventh installment. Remember Arizona is a second-chance AND estranged-friends-to-fake-lovers-to-the-real-thing romance, and yes, it's set in Arizona, specifically the small town of Bisbee, which turns out to be an honest-to-goodness real place! I love it when I make little discoveries like that via Google while reading a book. Like the books before it, this seventh Country Love tale can very much be read independently of any of the other ones.
Tally Kerr and Sam Deschenes had been best friends for forever, and forever was exactly what Tally had hoped to have with the boy she had fallen in love with. Then Sam broke her heart, which resulted in a decade-long separation. She went on to live her life in New York, but now, she's back in their hometown of Bisbee, Arizona for an art exhibit she's curating--the same art exhibit where her cheating ex AND the one he was cheating with are part of. What's a girl to do?! Well, if you're Tally, you pick up the phone to call in the favor you're owed from the one person you haven't spoken to in ten years--the same person who broke your heart. She needs Sam to be her fake boyfriend for three weeks, and then they part ways again. Only Sam has no plans of letting her go this time around.
As always, I adored reading this latest installment in the Country Love series. Tally and Sam clearly still had feelings for each other, but I appreciated that it took a while for them to work through what happened ten years ago. Tally's Maw-Maw and Nico, a highly observant artist, get props for being fab supporting characters. Remember Arizona was an easy-breezy read, one with lots of lighthearted moments and a pinch of angst. (I do want to note, though, that Lorelei was described as a "Philippine woman", when it should have been simply "Filipino", which is gender neutral, but "Filipina" works, as well.) Five stars.
-------------------------