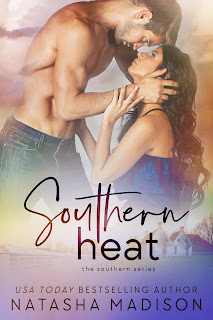 Note: An advanced reader copy (ARC) was provided by the author via Wildfire Marketing Solutions.
Natasha Madison takes readers back to the South for another round of romance, family, and secrets in Southern Heat, the sixth book in her Southern series. In the aftermath of the successful rescue mission for his cousin, Quinn Barnes makes a horrific discovery. Hidden underneath a bed is a young woman so badly beaten that she was near death. Days after, he learns that her name is Willow Davis, and she had been stuck for eight years in the hell-like presence of a man who was bent on revenge. All those years have made trusting other people difficult, and even though she's grateful to Quinn, she can't help but have one foot out the door, simple backpack at the ready. But Quinn doesn't want her to leave, not when he knows that they have a special connection between them. Can Willow trust Quinn with her heart, and can he trust her with his heart and to stay?
Dare I say that this second generation of Southern characters are proving to be even more enticing than the first? And that's saying something because I quite enjoyed reading their stories as well. Willow and Quinn's story is very much a slow burn romance, and rightly so considering everything that Willow had to endure for years. Trust was something she wasn't giving easily, but Quinn made it his mission to not cause her to doubt him in any way, shape, or form. He truly did go above and beyond for her, and the same could be said for his family. There's a twist in the story that I never saw coming, so saying that I was gobsmacked when the revelation was made is an understatement! As for who and what awaits readers in the next book, there's a hint of the former and the latter, more so if you read the blurb for it, so I'm excited for all of it. I'm giving Southern Heat five stars.
------------------------