Review: The Virgin Replay by Lauren Blakely (Rules of Love #3) 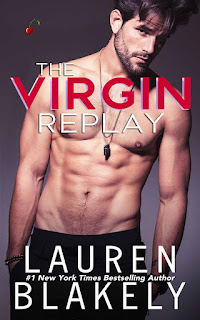 Note: An advanced reader copy (ARC) was provided by the author.
After the awesomeness that was her Men of Summer trilogy, Lauren Blakely returns to her Rules of Love series, although I do consider the former being a spin-off of the latter since the same cast of characters recur in both. The Virgin Replay is the third novel in the Rules of Love series, and this time around, we've got Sierra Blackwood and Chance Ashford at bat (see what I did there?). She's Grant Blackwood's younger sister and owner of The Spotted Zebra, and he's the closing pitcher for the San Francisco Cougars. But these two share a friendship of their own, regardless of the one Chance has with her brother. It's also that very friendship that has him reluctant to act on his attraction to Sierra. However, when they agree to be each other's fake date during a destination wedding, so much changes. Maybe if they come to an agreement that this is temporary and neither will catch feelings, it won't feel like Chance is breaking the guy code--the same one he diligently adheres to. Or maybe he's merely fooling himself because what's going on between him and Sierra feels real.
This third Rules of Love book takes on both the friends-to-lovers and falling-for-your-brother's-best-friend romance tropes, and unsurpisingly, Lauren Blakely has written a wholly entertaining and endearing read. Yes, we all know how it's going to end, but Blakely has made her main characters fun and flirty and their story is guaranteed to charm the proverbial pants off romance readers. The whole fake date aspect was probably the sole thing that I felt some hesitation with, mostly because they all tend to play out the same way. So I keep on eye on what bit of creativity an author adds to it, and in the case of Sierra and Chance, Blakely doesn't disappoint. Aside from the romance between the two main characters, the bonus of having past couples and seeing not only where they are at this point in their happily-ever-afters, but also the roles they play in Sierra and Chance's love story. Of course, there are the potential couples that I also have my eye on, and I'm excited to read their stories soon! For now, The Virgin Replay garners a much deserved five stars.
Release Date: 24 September 2021
Date Read: 19 September 2021
Learn more about Lauren Blakely.
Pre-order The Virgin Replay on Amazon | Apple Books | B&N | Kobo.