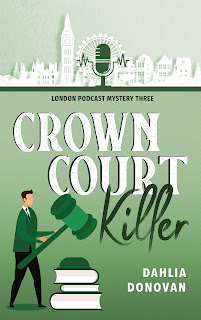 Note: An advance reader copy (ARC) was provided by Hot Tree Publishing via Gay Romance Reviews ARC Team.
I do adore Dahlia Donovan's London Podcast Mysteries and I was thrilled when I found out that there was going to be a third book added to the series! Crown Court Killer finds engaged couple Dannel Ortea and Osian Garey continuing with their London Crime Podcast and contemplating handing off the reins of wedding planning to Osian's sister. They do, however, become involved in a murder mystery when their friend, solicitor Wayne Dankworth, who also happens to be Dannel's younger brother's partner, is the sole suspect the police focus on. As the evidence mounts against Wayne, Osian and Dannel race to find clues and uncover secrets. As they dig deeper, it looks like they're up against a formidable foe, one who isn't going to hesitate taking anyone down in order to get whatever they want. Can Oz and D solve this mystery before it's too late?
While I loved the first two books in the series, Cosplay Killer and Ghost Light Killer, this third addition is my favorite. I appreciate how Dahlia Donovan strikes just the right note with these mysteries. The romance is still there, even with the heavier dose of mystery, and I certainly have no complaints. Osian and Dannel, aka Oz and D (a moniker Dannel is absolutely thrilled about...NOT!), are two people clearly secure in their relationship and they so work well together, both as a committed couple and as amateur sleuths. I do think that trying to find out who was framing Wayne was their most complex mystery to date. I had my suspects, but when everything was revealed, suffice it to say that I was a wee bit gobsmacked that I hadn't put the pieces together. Gah! Fingers crossed we get more from this series. I'm handing Crown Court Killer five stars.
-------------------------
Read my reviews for the London Podcast Mystery series: