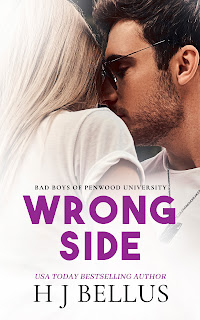 Note: An advance reader copy (ARC) was provided by the author via HEA PR & More. The published version of the book was read for comparison purposes.
Wrong Side is the first book in the new Bad Boys of Penwood University new adult romance series from HJ Bellus. The series features four best friends who are college football players who are in their junior year and are all feared and revered around their school. Book one is about the leader of the group and the football team's biggest star player, Theo Hudson. The first time one of his friends targets a freshman student, Theo stands to the side until he decides enough is enough. There's something about Sadie Alexander that makes him protective of her. She may seem meek and timid, but the girl's got a backbone once she's pushed too far. She's escaping the world of privilege and cold apathy she grew up in, while he's simply counting the days before he can rid himself of everything Penwood represents. Neither expected to become friends...and then far more.
This was a good read, one that was angsty yet thoughtful. There was romance and heat and even a sprinkling of lighthearted humor. I appreciated Sadie wanting to be her own person, refusing to be shackled with the put-upon "responsibilites" of being an Alexander, "responsibilities" being nonsensical demands of her hateful parents. I liked seeing her growth throughout the story, and aside from Theo, she also had a support system in Harvey, the family driver, Margo, her best friend, and albeit belatedly, Jillian, her older sister. Of course, it was Theo being in her life that became a true life changer for Sadie, and I loved that he was all in with her. All that being said, I do think the book needed a wee bit more polishing (i.e. editing and proofreading). There were word usage issues and there were times where things felt rushed, thereby not providing details when resolving things. Still, the story did hold my attention, and I was emotionally invested in both Sadie and Theo and am curious enough to read the next in the series. Four stars for Wrong Side.
Release Date: 11 May 2022
Date Read: 08 May 2022
Learn more about HJ Bellus.
Purchase Wrong Side on Amazon.